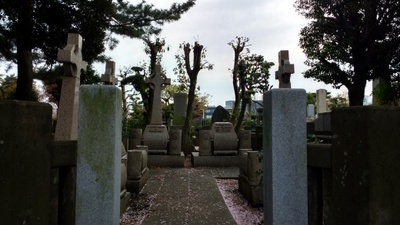 The Irwin family plot at Aoyama Cemetery. Robert Walker Irwin's grave is at right, with the cross having fallen off

Robert Walker Irwin was a prominent figure in relations between Japan, the United States, and Hawaii in the 1880s, serving for a time as acting Hawaiian Consul in Japan.[2], succeeding Harlan P. Lillebridge in that position.[3] He played a prominent role in the early 1880s (especially 1884) in negotiating agreements and organizing arrangements related to the beginning of Japanese immigration to Hawaii. He was one of the first Americans to become a naturalized Japanese citizen, marrying a Japanese woman named Takechi Iki, and living in Japan from the 1880s until his death in 1924.

A businessman descended from Benjamin Franklin[4], Irwin was born and raised in Pennsylvania, and first traveled to Japan in 1866, where he was stationed for a time in Yokohama as an agent of the Pacific Mail Co., later becoming involved with the Mitsui Trading Company (est. 1876). In 1867, he was appointed Vice-Consul of the Kingdom of Hawaii in Japan, becoming Consul General in 1881, and Minister Plenipotentiary for the Bureau of Immigration in 1882 during the visit to Japan of Hawaiian official John Kapena. In 1884, Irwin became Hawaii's Resident Minister in Japan, and special agent of the Bureau of Immigration.

Takechi Iki was an adopted daughter of the Takechi family, and was 17 years old when she accompanied Irwin as he departed the Pacific Mail Co. for a job in Nagasaki in 1869. Marriage between Japanese & non-Japanese was first legalized in Japan in 1873, and the couple had their marriage officially registered in 1882. Irwin then remained in Japan the rest of his life, until his death at 81. He is buried at Aoyama Cemetery in Tokyo.[5]

His summer home in Ikaho (伊香保), Gunma prefecture, still stands and has been designated a historical site by the city. In conjunction with his summer home being located there, Ikaho is host to an annual Hawaiian Festival, and was sister cities with the Hawaiian city of Hilo until Ikaho's merging into Shibukawa City in 2006.[6]