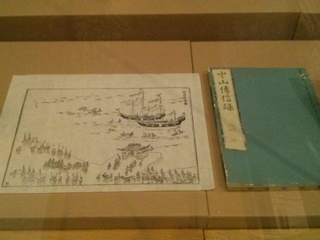 A copy of a Japanese woodblock-printed edition of the Chûzan denshin roku, on display at the National Museum of Japanese History.

Zhōngshān chuán xìn lù (J: chûzan denshin roku) is an account of Ryukyuan history, politics, topography, language, and customs written by Chinese investiture envoy Xu Baoguang, based on his journey to Ryûkyû in 1719. The volume was republished numerous times in Japan, and became one of the most widely read, and widely regarded, sources on the Ryûkyû Kingdom; numerous Chinese and Japanese works draw extensively on Xu's book.

Along with the history, topography, governmental structures, customs, and language of Ryûkyû, the text also describes the Chinese envoys' journey to the island kingdom, and a variety of formal receptions and banquets enjoyed by the envoys, along with official rituals and ceremonies, including the investiture ceremony itself. The volume's diagrams of the maritime distances between Fuzhou and Naha, and between Naha and various other locations in the Ryûkyû Islands, may be the earliest extant such record.[1]

Following his return to China in 1720, Xu organized the text to be formally presented to the Kangxi Emperor. It was then published for wider consumption in China in 1721, by a publisher called Èr'yǒuzhāi (二友斎, lit. "Two Friends Studio"). It is unclear precisely when the text first made its way to Japan, but it is mentioned in documents from 1740 and 1759;[2] it was then republished in Edo and Kyoto beginning in 1765, including a version published in Kyoto in 1766 which included kundoku marks aiding the Japanese reader to read the classical Chinese.[3] The Kyoto publishers were Hayashi Ihei (Bunshidô) and Zeniya Zenbei (Nishiyama-bô). Some of these editions bore a preface by Confucian scholar Hattori Somon. The text was later re-published in a variety of different forms, some more loyal to the original than others. Morishima Chûryô's Ryûkyû-dan, published in 1790, draws extensively on the Chûzan denshin roku, as do the Ryûkyû nendaiki and Ryûkyû kitan, both published in 1832.

The book is divided into six chapters (kan, 巻).