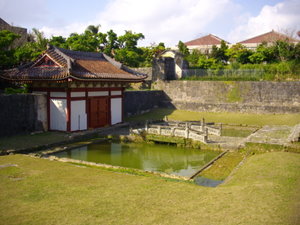 Engaku-ji as it appears today, with elements of the entry area rebuilt. The central areas of the temple grounds beyond this gate remain completely unrestored.

Model of Engaku-ji as it appeared before its destruction, with the pond, bridge, and outer gate area seen above off of the photo to the right.

Engaku-ji was the family temple for the second Shô Dynasty, and the head temple of Rinzai Zen in Ryûkyû. Established in 1492 and constructed over the next three years, it was located just north of Shuri Castle, just outside the castle walls. Designated a National Treasure in 1933, the temple was destroyed in the 1945 Battle of Okinawa, and today only the gates of the temple have been rebuilt.

The temple was founded by King Shô Shin in order to enshrine the spirit of his father, King Shô En. The Zen master Kaiin of Nanzenji served as the first abbot of Engaku-ji, which he named after and based on the Zen temple Engakuji in Kamakura.[1] A monument erected on the site in 1497 and inscribed in classical Chinese by the monk Shûyô indicates that Shô Shin pacified the country and laid the foundations for a peaceful and prosperous future; that the establishment of the temple itself brings prosperity to the people and that all the people of the land supported its construction; and finally that the king has planted a number of pine trees symbolic of his wish to nurture the growth of the kingdom.[2]

A temple bell which was to become much celebrated was cast in 1495-1496 by a Suô province-based Japanese metalworker identified only as Yamato Sôshû. The 1.9 ton bell still survives today, but as it was already showing considerable signs of wear by 1697, a reproduction of the bell was cast at that time. Both the 1495-96 bell, and its 1697 recreation, are today held by the Okinawa Prefectural Museum, and have been designated Important Cultural Properties.[3]

Three main gates faced west, towards the Enkanchi (Enkan Pond) and Benten-dô (Benten Hall). Beyond them, a small pond known as Hôjô-chi was spanned by a small stone bridge called Hôjô-kyô, built in 1496. This path, from the central gate and across the bridge, led directly to the inner temple gate, and then to the main plaza, or garan, of the temple, including a Buddha Hall (butsuden), bell tower, Great Hall (ôdono), and Oshôdô, now gone. Many of these buildings were repaired or renovated over the years, especially in the 1580s-90s and the late 17th century. After the Great Hall burnt down in 1721, it was rebuilt and renamed the Ryûenden.[4]

A series of tablets in honor of the kings of Ryûkyû were erected at the temple, in a particular Ryukyuan order, with the earliest Okinawan kings (Shunten, Eiso, and Satto) at the center, the kings of the First Shô Dynasty on each end of the row, and the latest kings, those of the Second Shô Dynasty, between them. In short, the arrangement looked something like this:

These tablets were temporarily rearranged into a standard Chinese arrangement (with the reigns simply alternating left and right, extending outwards from the earliest kings at the center, to the latest at the edges) whenever Chinese investiture envoys visited the islands. They were then placed back into the Ryukyuan order after the envoys had left.[5]

Many of the temple's structures were named National Treasures in 1933, but the entirely of the temple was destroyed in the 1945 battle of Okinawa. The Hôjô-kyô bridge was rebuilt in 1967; the main gate and its flanking left and right gates were rebuilt the following year. The rebuilt bridge was named an Important Cultural Property in 1975, and archaeological research continues on the site today. Some carved wooden elements and other objects from the temple survive today, in the collection of the Okinawa Prefectural Museum.[6]

Engaku-ji was closely tied to the Benten-dô located just opposite its gates; a particularly important set of Buddhist texts from Korea, gifted to the kingdom by Korea, were kept in this Benten Hall until they were stolen and taken back to Japan during the 1609 invasion of Ryûkyû.