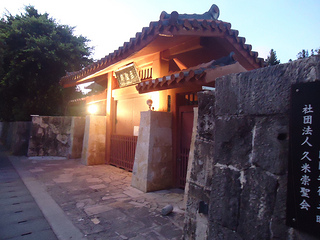 The main gate to the Shiseibyô Confucian temple on Kume Ôdôri

Kumemura, or Kuninda in the Okinawan language, was a walled district of Naha, the chief port city of the Kingdom of Ryûkyû. Located on the island of Ukishima, it was a community of members of the scholar-bureaucrat class, and the chief center of Confucian learning in the kingdom. The vast majority of government administrators and officials came from the families of Kumemura. The community was also responsible for the introduction of much of the Confucian and Chinese influence otherwise into Ryukyuan popular & folk culture, with many practices and philosophies being adopted within Kumemura first, before spreading into the broader population. Members of the Kume community were central to Ryukyuan foreign relations, serving as translators and interpreters, and as embassy officials on missions to Edo and Beijing, as well as heading the reception of Chinese investiture envoys in Ryûkyû, and drafting official diplomatic documents.

The community was said to have been founded in 1393 by thirty-six families from China, and the Ryukyuans (as well as the Chinese and Koreans) who lived there were, to some extent, continually thought of as "Chinese," or at least as coming from different stock than other Ryukyuans, even after many generations passed (and after much intermarrying had occurred). Many scholars today suggest that the number "thirty-six" is really meant to simply indicate "many," and that while conventional wisdom has it that these families came chiefly or exclusively from Fuzhou, in fact some at least are believed to have come from Zhangzhou, Taizhou, and Quanzhou. Further, while the myth of the 36 families suggests they came as a single distinct group, this concept more likely refers to a more general flow of some number of unrelated families over a period of some years, from a variety of places - in other words, to a more general immigration event.

By the mid-15th century, the community was surrounded by earthen walls, and contained around a hundred homes. The main thoroughfare, Kuninda Ufumichi (J: Kume Ôdôri), cut across the district, running from the "Great Gate" (O: Ufujô, J: Ômon) which served as the entrance to the neighborhood in the southeast, to the Nishinjô ("Northern Warrior Gate") in the northwest. These gates were grand structures, in a style similar to that of the Shureimon of Shuri castle.[2] According to feng shui conceptions of the town's layout, the Great Gate was the neck of a dragon, Kuninda Ufumichi its back, and the Northern Gate as its tail, with the great stones of Nakashima, just across the river in Izumisaki, as the dragon's pearl, or wish-granting jewel. Two stones by the Great Gate represented the dragon's eyes, and two trees its horns.[3] The Taoist temple Tensonbyô lay to the north of the road, while two Tenpigû temples to the sea goddess Matsu (aka Tenpi) lay to the south. A natural spring called Yuuna-nu-kaa, located near the center of the village, served as one of the chief communal sources of fresh water.[4]

The community began to decline in the 16th century, as the kingdom's foreign trade connections declined, due to shifts in Ming maritime trade policies, and the entrance of Europeans into the trading networks. As early as 1606, it's said only six lineages remained (the Sai (蔡), Tei (鄭), Tei (程), Rin (林), Kin (金), and Ryô (梁)).[5] According to one source, around that time there were perhaps as few as thirty elderly residents, and some number of children, in the community.[6] The 1609 invasion of Ryûkyû also had a detrimental effect upon the community. The royal government worked to restore tributary and investiture relations with China, however, and also transferred the family registers of a number of Naha and Shuri elite families to Kumemura, and so the community began to revive. These families, along with those descended from Chinese immigrants more recent than the original 36 families, were known as shinnyû tôei jin, or "newly entered people of the Chinese community [i.e. Kume]." By the late 19th century, just before the fall of the kingdom, as many as ten out of twenty-five Kume families (or 40%) were of one of these newer lineages; only fifteen families (or 60% of the Kume aristocracy) traced their lineage back to the 36 families.[7]

The community responded to the fall of the Ming Dynasty by initially rejecting the Manchu Qing Dynasty and turning away from Chinese culture towards more native Ryukyuan practices. However, before long they recognized their potential role in leading an effort to strengthen the kingdom's Confucian and (Ming) Chinese cultural practices and cultural character, and were encouraged by the royal court to do so. With the support of the royal court, the community thus revived, and led the 17th-18th century sinification of the kingdom, introducing considerable Confucian or Ming cultural influences into many aspects of government structure, practices, and rituals. As early as the 1670s, top Kumemura official Kin Seishun established a Confucian temple in the village, and had teachers of Confucian reading and recitation teaching the Confucian classics. In the 1680s, students began to be sent to Beijing again, after a hiatus in that practice of several decades following the violence and tumult surrounding the fall of the Ming.[6] A Confucian academy known as the Meirindô was established in Kumemura in 1718.

Though Kumemura would retain its distinct identity and societal/political/cultural role up until the fall of the kingdom in the 1870s, by the 17th century the walls around the district had gone, and the community was somewhat more integrated with the other districts of the city. As experts in scholarship, languages, and diplomacy, members of the Kumemura community served as translators and official government representatives not only in interactions with China, but when the time came with Westerners as well.

A road known as Ufujô-nu-mee michi (J: Ômon no mae dôri) ran from the Great Gate to the Confucian Shrine, roughly perpendicular to Kuninda Ufumichi. In the modern period, it became the major commercial thoroughfare of the city, lined with department stores. Meanwhile, from 1914 to 1933, streetcars ran along Kuninda Ufumichi, connecting Naha and Shuri.[3] Today, Ufujô-nu-mee-michi is no longer evident, as the street plan was changed in the postwar period; sections of Kuninda Uufumichi remain, however, as part of Prefectural Route 47.[8]

Members of the Kume community formed the Kume Sôseikai in 1914, an organization which continues today to oversee the two Confucian temples and various other community activities, and to promote research and appreciation of Kume's history in a variety of ways, including the publication of a scholarly journal featuring articles on the history of the community.

The administration of the Kume community, and in particular of the reception of Chinese investiture missions, and preparations for tribute missions to China, was headed by an official called the Kumemura sôyaku (久米村総役), Kume sôriyaku (久米総理役), or sôri Tôeishi (総理唐栄司). He was of shikin dayû (紫金太夫) rank, the highest rank someone from Kumemura could achieve.[9] This official also oversaw children's education within the community until 1678, when those responsibilities were taken over by a new post, called kôkaishi (講解師) or kunkoshi (訓詰師). Individuals to the latter post were appointed following an exam. The Kume Tenpi-gû was the center of elite education in the kingdom until 1718, when the Meirindô was established at the Confucian temple.

The Kume sôriyaku was assisted by an official called the chagushi (長史), selected to serve for a period of two to three years. From 1403 to 1646, this title was held by the lead tribute ambassador, but after 1646, the title came to refer to this position within the town administration. The chagushi served a key role in the management of financial, legal, diplomatic, and commercial matters.[10]

The Kumemura hissha (久米村筆者, lit. "Kumemura secretary"), also known as zokkan daihicchô (属官大筆帖), was the chief secretary under the chagushi, and oversaw the distribution of aristocratic stipends and systems of justice. The position was originally held only by people from Kume, but later came to be held by members of the Naha aristocracy as well, on occasion. The secretary served for a one-year term.

An official called the kanjihô (漢字方) oversaw all formal documents sent to China. Appointment to the position came after a test of the applicant's ability at regular script. From 1728 on, this position was also known as kanji goyûhitsu (漢字御右筆).

Another official, in charge of overseeing calendrical matters, was known as the tsûshohô (通書方) or shikenshokan (司憲書官). One of a number of positions to require a formal exam, it was originally called shirekikan (司暦官) or rekiyaku (暦役); the name was changed in 1737.