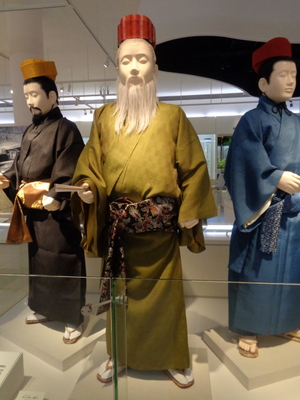 The scholar-aristocracy of the Ryûkyû Kingdom consisted of four groups of families, claiming elite pedigree, education, and culture, from which government official positions were filled. They were distinguished from Ryukyuan commoners by their possession of family lineage registers known as kafu or keizu, and were thus also known as chiimuchi (J: keimochi, lit. "possessing lineage"). While members of the aristocratic families of Shuri and Kumemura dominated the highest positions in the central government, those from the aristocratic families of Naha and Tomari occupied other positions.

The Sai (蔡), Tei (鄭), Tei (程), Rin (林), Kin (金), and Ryô (梁) families were the chief lineages of the Kumemura community.[1] They served in a variety of positions within the administration of Kumemura, as well as in the central government.

The scholar-aristocracy of the port-town of Naha included families such as the Bai (貝). They chiefly served in positions related to the administration of the port. The highest position attainable for a member of the Naha scholar-aristocracy was that of Omonogusuku osasu-no-soba, head of the Omonogusuku, the royal storehouse located out in the harbor. Other positions held by members of the Naha scholar-aristocracy included those of the Naafa satunushi (head of local Naha city administration) and his secretaries (Naha hissha); heads and clerks of the Oyamise; satôza ôyako and satôza bujô (managers of sugar imports and exports); ufunitii bujô (Magistrate of Ships, who oversaw the construction, repair, and equipping of ships, and performance reviews for captains and crews); heads of the shinoboseza, which handled the collection and transportation of goods being sent to Kagoshima; and Naha yokome, inspectors who handled local civil cases. A number of these positions, as well as other municipal administrative positions within Naha, were typically staffed in pairs, with one member of the Naha aristocracy and one member of the Shuri aristocracy holding the position simultaneously and working together with one another. Members of the Naha aristocracy also served in a number of positions working in relation with the Satsuma han officials of the zaiban bugyôsho, including waiting on the zaiban bugyô as Yamato yokome; overseeing communications with foreign ships as toiyaku; or serving within the zaiban bugyôsho as ukaiya mui or ukaiya mui bettô. Some also came eventually to sometimes be appointed Kumemura hissha (chief secretary of Kumemura), a position previously exclusive to members of the Kumemura community.[2]

When a child was born into the scholar-aristocracy, whether they were a son or a daughter, they were to be brought to an office known as the ôkumiza to be formally registered and assigned a childhood name (童名, warabina). This was to be done no later than 17 days after the birth; if the child was older than 17 days when the parents submitted the paperwork (a shôshi shômon 生子證文), the parents were penalized with either the punishment of terairi, or a monetary fine.

Aristocratic children were educated from the age of 7 or 8 until the age of 14 or 15 at one of 21 local village schools (mura gakkôjo) in Naha, Tomari, or Shuri.[3] The curriculum included the Confucian classics, the Three-Character Classic, and The Twenty-four Paragons of Filial Piety, among other works. At the time of the fall of the kingdom in the 1870s, the one of these schools located in Wakasa-machi had one head lecturer and 82 students. Each school doubled as a local administrative office; the Wakasa-machi school housed one nakadori and two hissha (secretaries).[4]

When the child was around 15 years old, the parents, along with the rest of the family (ichimon) and their local group of families (kumijû, 與中), submitted a request for permission to perform the katakashira yui, a coming-of-age ritual which in which the child was given an adult haircut, and was ceremonially introduced into adulthood. The child was then granted an adult name (nanori) and rank (ikai), with young men typically being granted the very low rank of shi (子) or niya (仁屋) at this time.