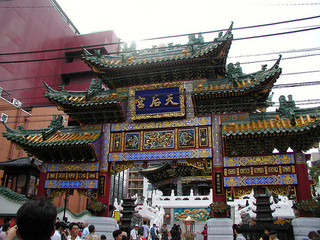 Tenpi, also known as Mazu, is a Daoist goddess of the sea, most often prayed to for safe voyages. Tenpi worship is particularly popular in Southern China, Taiwan, and Ryûkyû.

Tenpi is said to be the deification of Lin Mo (b.c. 960), a daughter of the Lin family of Meizhou (in Putian county, Fujian province). She was initiated into the mysteries of Daoism at age 13, and at age 16 she was visited by a Daoist immortal who granted her a magic talisman, allowing her to foresee good and bad fortune, and to protect people from shipwrecks and other calamities. Though she died at the young age of 28, she became a spirit or goddess, and continued to watch over and protect people. She was later granted the title "Tenpi" (lit. "heavenly princess/queen") by an emperor of the Ming Dynasty, in the 14th century. Many in China, Taiwan, Ryûkyû, and elsewhere associate her with being an incarnation of the bodhisattva Kannon, and in Ryûkyû she is sometimes known as Bûsa-ganashi (J: Bôsatsu-sama, i.e. "the bodhisattva").