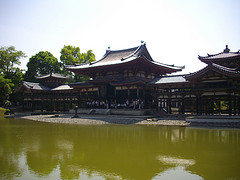 The Phoenix Hall at Byôdôin.

The Byôdôin is a Buddhist temple in Uji, near Kyoto, devoted to Amida Buddha, and famous for its Phoenix Hall (Hôôdô), the only major building in the complex which survives today.

The compound was originally a manor belonging to Minamoto no Tôru (d. 895),[1] and later purchased by Fujiwara no Michinaga in 998; his son Fujiwara no Yorimichi used it as a summer retreat for some time before converting it to a temple in 1052. The Phoenix Hall was built the following year.

The Phoenix Hall, constructed in the shinden-zukuri style of Heian period mansions, with its large and completely ornamental wings, is said to resemble a bird which has just alighted. Situated in front of a lotus pond and housing a statue of Amida, it is meant to recall Amida's Western Paradise. Patterned after palaces seen in paintings of the Western Paradise, the structure, is in reality only one story tall, and consists of only one interior room - that which holds the Amida image. However, it is made to appear to be two stories, with walkways on the second story extending all the way down the wings, and watchtower-like elements at the corners of the wings, where they turn and progress forwards towards the pond.

The Amida image itself was sculpted in the yosegi multiple-block method by Jôchô, who also produced many sculptures for the Hôjô-ji and other major temples founded around that time. A number of flying, dancing apsaras, carved out of wood, circle the room, high on the walls, emulating again the environment or appearance of the Western Paradise.

Over the generations, the Fujiwara added numerous other buildings, including a sutra repository, pagoda, treasure house, lotus hall (hokkedô), and a hall dedicated to the Five Wisdom Kings.

The 1180 First Battle of Uji, which opened the Genpei War, took place in and around the Byôdôin, and on nearby Uji Bridge[2]. A Minamoto clan force, led by Minamoto no Yorimasa and Prince Mochihito, and accompanied by a number of warrior monks from Miidera, were chased here by Taira clan samurai. The Minamoto were defeated, Yorimasa committing suicide inside the Phoenix Hall; according to some sources, this was the first recorded instance of a seppuku in the midst of military defeat.

The temple was attacked and destroyed in 1336 during the conflicts between Kusanoki Masashige and Ashikaga Takauji, leaving only the Phoenix Hall, bell tower, Kannon-dô and a few other small structures standing today.

The Byôdôin has been designated a World Heritage Site, along with many other sites under the collective designation "Historic Monuments of Ancient Kyoto (Kyoto, Uji and Otsu Cities)," and many of the sculptures and other objects associated with the temple have been designated National Treasures. A modern storehouse/museum on the site houses many of the older or more precious pieces, removed from the Phoenix Hall and maintained there for conservation purposes.