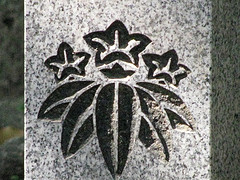 The Minamoto sasarindô crest, seen on the stone stairs to the grave of Minamoto no Yoritomo in Kamakura

The Minamoto clan was a prominent clan in the Heian period, and the clan from which all shogun have claimed descent. Defeating the Taira clan in the Genpei War (1180-1185) and uniting Japan, the Minamoto established the first shogunate, marking the rise of the samurai class and the beginning of a period of over 600 years during which Japan would be under samurai (warrior) rule.

Along with the Fujiwara, Tachibana, and Taira clans, the Minamoto were one of four clans which dominated Heian politics and court society. Originally an honorary surname granted by the emperor, the Minamoto originally served as agents of the court, suppressing rebellions and guarding the state's borders. Different lineages of Minamoto claimed descent from several different emperors; the most prominent Minamoto line was the Seiwa Genji, who traced their ancestry back to Emperor Seiwa, while other prominent lines included the Kawachi Genji and Yamato Genji. As with the Taira, by the mid-10th century, members of the Minamoto clan - including both those born into it and those brought into the fold - were quite numerous, and scattered across the Kantô and other parts of the country.[1]

The Seiwa Genji rose to prominence in the late 11th century, as Minamoto no Yoriyoshi led a group of warriors against the Abe clan in the Zenkunen War of 1051-1063, followed by his son Minamoto no Yoshiie leading a similar campaign against the Kiyowara clan in the Gosannen War of 1083 to 1087. In both conflicts, the Minamoto fought on behalf of the Imperial court against secessionist rebels who sought to establish their own authority in parts of Tôhoku; Yoriyoshi and Yoshiie came to be regarded as among the greatest of warriors, establishing or heightening the reputation of the clan.[1]

In the 11th and 12th centuries, struggles for power emerged within the Imperial court. Though the sides in these conflicts were originally not drawn along clan lines, by the middle of the 12th century, the conflict came to be primarily one between the Minamoto and Taira clans. The Hôgen Disturbance of 1156 is frequently cited as marking this dramatic shift. Both sides in the conflict included members of the Taira, Minamoto, and Fujiwara clans, but the end of the conflict set the stage for rivalry to develop between the Minamoto, led by Minamoto no Yoshitomo, and the Taira, led by Taira no Kiyomori. The two clans faced off three years later, in the 1159 Heiji Disturbance, which ended in a Taira victory. Several of Yoshitomo's sons were killed, and several exiled, Yoshitomo himself being killed shortly later. Kiyomori came to dominate the Imperial court, establishing the first informal samurai-dominated government.

Twenty years passed, as the Minamoto, scattered and defeated, gradually regained strength and unity. In 1180, Minamoto no Yorimasa, then head of the clan, came to support Prince Mochihito, one of several contenders for the Throne, in standing in opposition to Kiyomori's government and to his choice for the Throne. The clan rose in a call to arms, allying with the warrior monks of Mt. Hiei, and others, against the Taira, in a conflict which would come to be known as the Genpei War. For the next five years, the Minamoto and Taira battled over control of the country. Yorimasa committed seppuku at the battle of Uji, the first battle of the war, and Kiyomori died soon afterwards of illness, leaving Minamoto no Yoritomo and Taira no Munemori as heads of the two clans. Though the Minamoto initially faced repeated defeats in the early years of the war, following a Minamoto victory at Kurikara in 1183, the tide of the war began to turn. Despite internal clan conflicts, the Minamoto eventually achieved victory over the Taira, the war coming to an end with the battle of Dan no ura in 1185. The Taira clan would be hunted down and all but exterminated in the months and years immediately following.

Minamoto no Yoritomo was named shogun in 1192, governing from his traditional base of operations in Kamakura. The Kamakura shogunate would last roughly 150 years, until 1333, but only the first three shogun would bear the Minamoto name. Following Yoritomo's death in 1199, Hôjô Tokimasa, the father of Yoritomo's wife Hôjô Masako, claimed the title of shogunal regent (shikken). This post then became hereditary within the Hôjô clan, who came to wield the true power, dominating the shogunate and thus the country. The assassination of the third shogun, Minamoto no Sanetomo, in 1219, marked the end of the Seiwa Genji lineage of the Minamoto clan, and the end of the Minamoto's period of historical prominence.

The Ashikaga and Tokugawa clans, which would rule as shogun from 1336-1573 and 1603-1867 respectively, claimed descent from the Minamoto, thus implying a connection to a strong warrior heritage and to the rulers of the past, and contributing to ideological constructions of legitimacy.

Selected members of the Minamoto clan