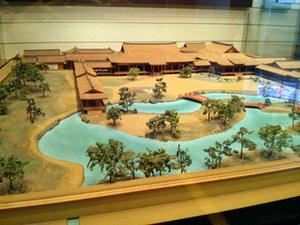 A model of the Higashi-Sanjô Palace, an example of shinden-zukuri.

Shinden-zukuri was a prominent architectural style used in Heian period aristocratic mansions. The Byodoin in Uji is the most famous surviving example of the style.

The central building, or shinden (lit. "sleeping palace") was arranged on a north-south axis, and connected to a number of other structures including two wings (tai, 対) which extended out perpendicular to it, encircling a pond and garden. The wings were attached to the shinden by a one-bay-wide corridor called the sukiwatadono, and a two-bays-wide corridor called the watadono. The wings consisted of "interior" core corridors (moya) flanked by "exterior" covered walkways (hisashi). The total area encircled (on three sides) by these structures generally covered roughly 120 square meters (one square chô).

Of these structures, only the shinden contained functional rooms. The compound extended to the north, there housing servants' quarters, kitchens, studies, tea rooms, and various kinds of reception rooms or meeting rooms. Developing upon earlier modes and serving as the model for future styles down to the present, very few of the spaces in the complex were truly enclosed or dedicated to a single purpose. Only the main bedroom had any real walls, while everything else in the complex was enclosed only by shôji or fusuma, which could be slid open or removed entirely to alter the shape and size of a space for whatever purposes necessary, and to essentially open up the spaces to the exterior, to the elements, making any space in the complex (particularly the wings) essentially a semi-outdoor patio or porch.

Other prominent structures in the shinden-zukuri style include Itsukushima Shrine, the Sanjô Palace and the Hôjô-ji.