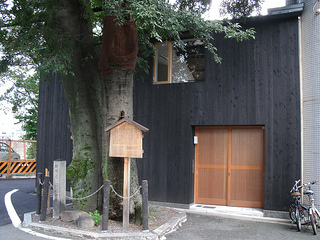 A hackberry tree, and its associated shrine, marking the site of one small portion of the formerly extensive estate at Kawara-no-in.

Minamoto no Tôru was a son of Emperor Saga, and prominent court noble & official of the 9th century. He was appointed Sadaijin (Minister of the Left) in 872, and was elevated to Junior First Rank in 887.

Tôru is known as one potential inspiration for the character of Hikaru Genji, the lead protagonist of the epic Tale of Genji. He is also known for his villa in Uji, which later became the site of the Byôdô-in, and for his grand mansion in Kyoto proper, which once held the grounds of the Shinto shrine Nishiki Tenmangû.

He retired to this Kyoto mansion, known as Kawara-no-in, after the rise of Fujiwara no Mototsune who, as Imperial regent, surpassed and overshadowed Tôru. The major Kyoto avenue Kawaramachi-dôri is said to take its name from this mansion.

The estate covered a rather large area, ranging from the banks of the Kamogawa in the east to Yanagi-no-banba-dôri in the west, and from Gojô-dôri in the north to Shômen-dôri in the south. The estate drew water from the Kamo to feed its gardens and ponds. A large hackberry tree (J: enoki) which stands today is said to survive from the extensive woods which once covered a portion of these grounds; a small shrine called Enoki Daimyôjin, associated with the tree, stands today.

The Kawara-no-in is associated with the Tale of Genji in a number of ways; in addition to the suggestion that Tôru himself may have been a model or inspiration for the character of Prince Genji, the mansion itself may have been the inspiration for the setting of the Rokujô mansion, where much action takes place. It is also said to have possibly been the place referenced in a chapter in which Genji invites the young lady Yûgao to a mansion, where she later literally dies of fright.

Tôru is enshrined at the Shiogama Shrine, a subordinate shrine under the Nishiki Tenmangû.