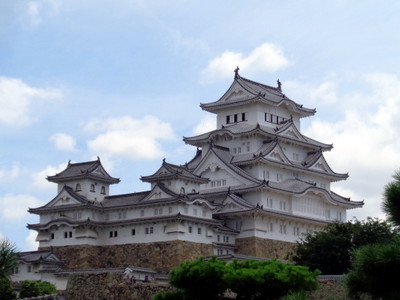 The tenshu of Himeji castle

Himeji castle is among the largest and most famous of the castles which survive from the Edo period. Originally built by Ikeda Terumasa and expanded by Honda Tadamasa and Honda Tadatoki beginning in 1617, the castle later became the home of the Sakai clan lords of Himeji han from 1749 onward.

The main keep has five stories on its exterior, and seven floors inside. Known as a "coalition-style" or renritsu shiki keep, it is connected to three smaller keep towers by covered passages. After being reassigned from Ise Kuwana han to Himeji in 1617, the Honda family expanded the castle considerably beyond what the Ikeda had built. A west bailey called Chûshomaru was added, and housed the residence for Honda Tadatoki, heir to the first Honda lord of Himeji, Tadamasa. The Honda also built an additional tower called Keshô-yagura ("Cosmetics Tower"), and a separate residence just inside the Ôtemon for Tadatoki's wife Sen-hime (daughter of Shogun Tokugawa Hidetada); this residence was called Musashino goten.

This article is a placeholder or stub. You can help SamuraiWiki by expanding it.
Retrieved from "http://samurai-archives.com/w/index.php?title=Himeji_castle&oldid=42384"
Categories: