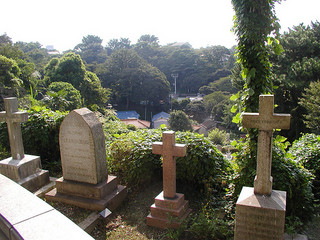 A few of the tombstones at the Yokohama Foreign Cemetery

The Yokohama Foreign Cemetery, located in Yokohama's Motomachi neighborhood, contains the graves of a number of prominent Chinese, European, and American individuals who died in Bakumatsu or Meiji period Japan. The cemetery covers a total of roughly 5600 tsubo and is divided into 22 sections; most of the graves were severely damaged in the 1923 Great Kantô Earthquake, and today the cemetery documents record roughly 5000 names and 3000 extant tombstones.

It was established in 1859 after Russian sailors Roman Mophet and Ivan Sokoloff were killed by sonnô jôi activists. The Tokugawa shogunate purchased an area of land adjacent to the temple Zôtoku-in in which to bury them; these remain the oldest graves in the cemetery today. Numerous other individuals were buried on the grounds over the years. The Japanese graves were moved in 1861, and the Chinese graves in 1871, in order to better differentiate between the groups. Zôtoku-in itself was moved to the Heiraku neighborhood, up on the Bluff, following the 1923 Great Kantô Earthquake.

Certain agreements and arrangements regarding the cemetery were established as part of the 1864 Memorandum for the Foreign Settlement at Yokohama, signed by representatives of the shogunate and of the governments of Britain, France, the Netherlands, and the United States. Following the Meiji Restoration, the government agreed to continue allowing use of the land for free, i.e. not charging the foreign community or foreign consulates any rent, but did require that the community take on the maintenance costs. The community formed a committee for that purpose in 1870, which was formally incorporated as a foundation in 1900, and which remains active today. A set of Treaties of Commerce and Navigation, signed with the UK and US in 1894 and with several other countries the following year, established that all such lands set aside as rent-free would now remain rent-free and tax-free in perpetuity.