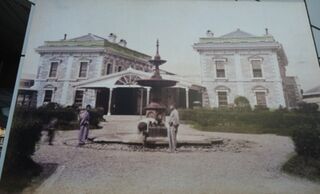 Sakuragichô Station, then called Yokohama Station, as it appeared in 1887. 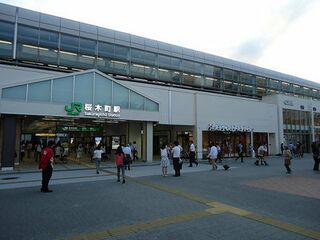 Sakuragichô Station is a train station in Yokohama, which today serves as the gateway to the Minato Mirai district. When it originally opened in 1872/5, it was one terminus of Japan's first railroad line, connecting Tokyo (at Shinagawa Station) and Yokohama.

Sakuragichô was "Yokohama Station" for 43 years, from its opening in 1872 until a new Yokohama Station was built in 1915 on the site which remains the main Yokohama Station today. A cast-iron fountain originally erected in front of the station commemorated the first modern waterworks system. The fountain is preserved today at the Waterworks Memorial Museum (Yokohama suidô kinenkan) in Hodogaya.

A railroad spur was constructed in 1911 to connect the Akarenga sôko customs houses then being built at Yokohama's port, with Tokyo, via Yokohama (i.e. Sakuragichô). The terminus of this short line, at the customs houses, was renamed Yokohama Port Station (Yokohama minato eki) in 1920, and the line ran until 1986, when it was dismantled as part of extensive construction projects transforming the area into the new "Minato Mirai 21" district. A rail bridge from that port rail line (rinkôsen) can still be seen today in Minato Mirai, and a platform has recently been reconstructed just outside Akarenga sôko.