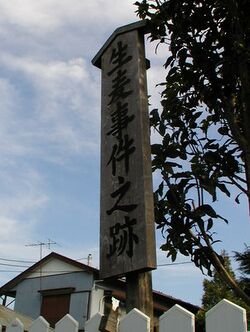 Marker at the site of the incident.

The Namamugi Incident, also known as the Richardson Affair, refers to the death of a British man, Charles Lennox Richardson, and the severe injury of several of his companions, at the hands of samurai from Satsuma han, in the eighth month of 1862. The Satsuma castle town of Kagoshima was bombarded by ships of the British Royal Navy the following year, in response, emphasizing the weakness of the shogunate to protect Japan from foreign threats. As this is often cited among the chinks in the shogunate's armor which led to its fall, the Namamugi Incident itself has come to be counted among the major events of the Bakumatsu period.

On the 21st day of the 8th month of Bunkyû 2[1]Shimazu Hisamitsu, father of the daimyô of Satsuma han, was returning from accompanying Imperial envoy Ôhara Shigetomi to Edo, to present the shogun with orders to travel to Kyoto to discuss the matter of expulsion of the foreigners[2], when he passed through the village of Namamugi, a locale on the Tôkaidô between Kawasaki and Kanagawa.[3] Foreigners resident or active in the area called this section of the Tôkaidô, lined with pine trees and affording fine views of Mt. Fuji, "the Avenue". On that day, Charles Lennox Richardson, a merchant based primarily in Shanghai, was accompanied by two Yokohama-based merchants, Woodthorpe C. Clarke and William Marshall, and by a cousin of Marshall's, a Mrs. Borrodaile, all four of them on horseback. They had already passed several other groups of samurai on the road that day without incident,[3] though official warnings had been distributed through the foreign communities that daimyô processions would be passing through, and to avoid the road that day.[4]

The standard version of what happened as the two parties met on the road relates simply that Richardson did not stop, stand aside, or dismount (let alone prostrate himself) to let the samurai procession pass, or that he even pushed ahead and sought to cut through the procession, for which he was attacked and killed by members of the samurai party.

Ernest Satow relates in his diary that upon seeing the daimyô's palanquin approaching, the four turned around, so as to not obstruct the procession, but were cut down from behind. Francis Hall's diary, meanwhile, asserts that Richardson's death was his own fault; that Marshall shouted at Richardson to stop and turn back but that Richardson, stubborn and arrogant, rode ahead alone into the samurai group, and was cut down.[3]

However, historian Constantine Vaporis points out that the situation was a little more complicated than the image painted by the standard accounts. As might be expected, sources differ on where they place blame. Was Richardson rude, stubborn, self-important, ignorant, or incompetent? Were the samurai from Satsuma excessively harsh, or racist in their disdain for the Englishman?

Richardson did not speak Japanese, and if he was given warnings to step aside, to stand back, or to dismount, it is quite possible he did not understand them.[4]

The road curved where the two parties met, and was quite narrow, with no space for the Englishmen to step aside. According to some Japanese accounts, Richardson's horse grew frightened, reared up, and moved into the middle of the road, towards the procession, as Richardson sought to step aside or turn back, or that, simply, in the process of turning around, Richardson came to be in the way of, or even amongst, the Satsuma party.[5] A member of the retinue ordered the foreigners to turn back or to dismount. When Mrs. Borrodaile's horse grew frightened and excitable as well, one of the daimyô's palanquin guards ordered them again to turn back. The group made to follow these orders, but were attacked,[3] the samurai feeling an obligation to do so in response to this breach of custom and affront to their lord's honor; the foreigners, like any other commoners who encountered a daimyô procession, were to not simply stop or pull aside, but to dismount and prostrate themselves.[4]

A Satsuma retainer by the name of Narahara Kizaemon is often cited as having led the attack on Richardson[6]. Kizaemon was the older brother of Narahara Shigeru[7], who would go on to play a major role in the governance and administration of Okinawa in the early Meiji period[8]. A samurai by the name of Kaieda Nobuyoshi is also today considered to have been among the chief attackers.[9]

Richardson was killed, Clarke badly wounded, Marshall a little less so; only Mrs. Borrodaile escaped relatively unharmed. Richardson is said to have managed to ride away a short distance before falling from his horse and being set upon by a number of samurai.[3] What may have been seen by the samurai as a relatively honorable act of mercy, killing Richardson once he was already on the ground, to spare him further suffering, was represented in British sources of the time as excessively cruel, barbaric, and dishonorable.[4]

While the other three escaped, the two men to the American Legation,[10] the samurai wrapped Richardson's body in a straw mat and deposited it next to a pine tree on the roadside.[3] 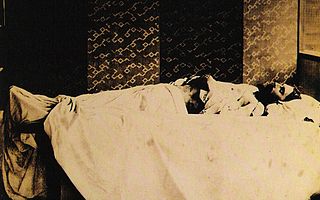 Photo of Richardson's body, taken shortly after his demise.

Though the foreign community in Yokohama was up in arms over the incident and demanded reprisals by force, the charge d'affaires at the British legation sought to resolve the situation diplomatically. In response to demands to turn over the man responsible, Satsuma simply offered the name Okano Shinsuke, claiming him to be a ronin for whom Satsuma could not be held responsible, and whose whereabouts were in any case unknown; Okano is today considered to have been fictional[9]. The British official, meanwhile, in the second month of 1863, asked for a formal apology and 100,000 pounds sterling in reparations from the shogunate, another 25,000 pounds in reparations from Satsuma, and that the offenders be punished. A low-ranking samurai was ultimately executed for the crime, though Narahara and others today believed to have been most responsible were passed over by the Satsuma authorities. The shogunate paid its portion of the reparations in the fifth month of that year, but Satsuma refused to do so. In the seventh month, in response, the Royal Navy bombarded Kagoshima.[6]

Twenty years after the incident, in 1883, a resident of the area - with his own funds and on his own initiative - erected a memorial stone for Richardson, on the site of the incident. That stone is today accompanied by a wooden marker (seen above), and a plaque explaining the incident and containing a transcription of the inscription on the stone.