The Dutch compound at Dejima as depicted in a handscroll on display at the British Museum, autumn 2018

Dejima or Deshima was a manmade island in Nagasaki Harbor to which the activities of the Dutch East India Company (VOC) in Japan were restricted in the Edo period.

The island was originally built in 1634-1636 by a group of 25 wealthy Nagasaki merchants, to be used by Portuguese merchants. These Portuguese merchants made use of Japanese-style homes and storehouses on the island, and paid rent on an individual basis to individual members of this group of Nagasaki locals, depending on the size and condition of the buildings they used. The island was originally called Tsukishima or Tsukijima ("moon island"), for its shape, being renamed Dejima in 1665.

In 1641, following the expulsion of the Portuguese in 1639, Dejima became the home of the VOC. The Dutch made a single payment which was divided equally among the twenty-five original Japanese merchant investors. For a few decades beginning in 1655, the shogunate allowed a free trade policy in the port, but from 1685, trade and other matters in the port town came under the control of the Nagasaki bugyô, the chief shogunal official in the city.

The island was miniscule, roughly 564 meters in circumference,[1] with a land area under 4,000 tsubo in size (3.2 acres, or just under 13,000 m2). Dejima was home to only about forty-four buildings, the original Japanese-style structures being soon replaced by the only European-style buildings in Edo period Japan, which housed at any given time only about ten to fifteen officers (including kapitans, factors, clerks, and physicians), plus their families, cooks, and servants.[2] These included two warehouses built by the Dutch[3] and one built by the shogunate for its own purposes in 1696. Several offices for shogunate officials were also located on the island, and shogunate authorities frequently searched the island for signs of smuggling or other illegal activities, in which scholars believe members of the VOC did indeed, at times, engage.

Access to mainland Japan, i.e. permission to leave Dejima, was via a wooden bridge (later replaced by one in stone) on the north side of the island. Access was severely limited, but included regular journeys made by all 10-15 VOC representatives to pay respects to the shogun at Edo. These visits took place annually until 1790, after which the Dutch visited the shogun only once every five years until 1850, when the practice came to an end. These missions generally cost around 3.7% of the company's annual profits.

Dutch ships were limited to two a year. They generally arrived in the seventh month, and were required to leave no later than the 20th of the ninth month. The VOC imported a variety of goods into Japan, including chiefly Chinese silk, but also Dutch books, microscopes, telescopes, watches, fire pumps, and other glasswares and technological objects in small quantities. They also imported cotton printed calicos (aka chintz), European ones of which came to eclipse Indian ones on the world market in the late 18th century.[4] In exchange, the Dutch obtained Japanese silver and porcelains, among other goods, later learning to produce their own porcelains, copying Japanese styles.

Generally, both European and Japanese women were not permitted on Dejima. The courtesans of the Maruyama pleasure district were a notable exception; they also served the Chinese merchants of the city, and Japanese visitors to Nagasaki from other parts of the archipelago. Europeans were permitted to hire a courtesan for lengthy periods, having the woman cohabit with them for even as long as a full year. The courtesans were officially required to check in at the gates every morning, and turn over the patron's fees for the previous night, but in practice this was not likely strictly observed. The courtesans are said to have preferred the company of the Chinese, however, and so charged higher rates to the Dutch.[5] Enforcement of restrictions on the island were quite lax at times, and on occasion, courtesans even escorted Dutchmen off Dejima (into Nagasaki proper), or accompanied them out of the country.[6] A number of Maruyama courtesans also had children with members of the Dejima community, though they were not permitted to give birth on the island. To a considerable extent, these children came to be regarded as "Japanese," being accepted and incorporated into Japanese society, being treated no differently in terms of status or class for their mixed background. Those not so fully incorporated into Japanese society, however, were banned from the country from 1639 onward. Some went on to live rather successful and happy lives in Batavia and elsewhere. This policy was reversed in the 1710s, however, and from that time forward, those of mixed-race - rather than being expelled - were now prohibited from leaving the country, as all Japanese were under the maritime restrictions policy of the era. Foreign fathers were obliged to contribute to paying for the child's upbringing and education, but they were typically raised by their Japanese mothers, in Nagasaki proper, and not on Dejima.[7]

The VOC Factory was officially closed in 1860. 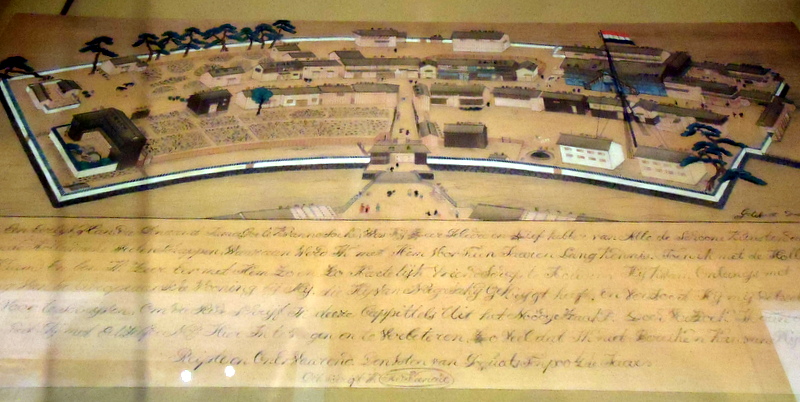 Dejima as rendered in a c. 1810s-1830s painting by Kawagara Keiga. Reproduction on display at National Museum of Japanese History.