From SamuraiWiki
(Redirected from Shimazu Mochihisa)
Jump to navigationJump to search 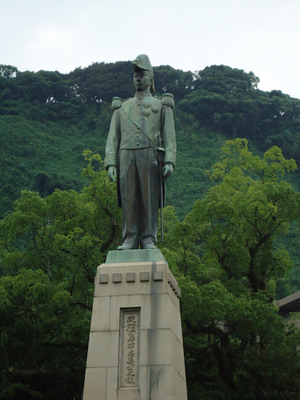 Bronze statue of Tadayoshi at the Tanshôen gardens in Kagoshima, designed by Asakura Fumio and erected in 1917

This article is about the Bakumatsu/Meiji era daimyô. For others by the same name, see Shimazu Tadayoshi (disambig).

Shimazu Tadayoshi, known as Mochihisa for the majority of his time as daimyô, was the 12th and last Edo period daimyô of Satsuma han. He was the son of Shimazu Hisamitsu, adopted son of Shimazu Nariakira, and is counted as the 29th head of the Shimazu clan.

Upon Nariakira's death on 1858/7/16, Tadayoshi succeeded him as daimyô, officially taking the position on 1858/12/28. Though he was obliged by the shogunate to adopt Nariakira's son Shimazu Tetsumaru as his heir, Tetsumaru died soon afterward, on 1859/1/2.[1]

Tadayoshi's grandfather Shimazu Narioki served as his guardian, watching over his political or administrative life, briefly, before his father Hisamitsu took over as regent, wielding considerable power over domainal affairs in place of his son. Acting in his son's name, Hisamitsu reversed many of Nariakira's policies, especially those pertaining to Ryûkyû, and took a moderate and cautious approach in contrast to the radical factions which began to emerge in Satsuma at that time.[2] While nominally honoring and supporting the will of the late Nariakira, Hisamitsu & Tadayoshi for the most part acted in strong support of the Tokugawa shogunate and of samurai privilege through the Bakumatsu and into the Meiji period.

Known by a number of different names in childhood, and his early adulthood, he was granted an audience with the new shogun Tokugawa Iemochi on 1859/2/7, and was granted the honor of taking one syllable from the shogun's name, changing his own name to Mochihisa. He would later change his name to Tadayoshi, however, on 1868/1/16, and this is the name by which he is most typically known.[3]

As a result of repeatedly requesting permission from the shogunate to postpone sankin kôtai obligations in 1862-1865 for a variety of reasons, in the end Tadayoshi became one of a relatively few daimyô in the entire Edo period who never performed sankin kôtai during his time as Lord.[4]

Following the 1863 Bombardment of Kagoshima by the British Royal Navy, in which much of the city was destroyed, Tadayoshi successfully represented to the Imperial Court that he had acted in accordance with the edict issued two months earlier by Emperor Kômei to expel the barbarians, driving the British ships away from Kagoshima in the end.[5] In 1865, however, he invited British diplomat Harry Parkes and his wife to Kagoshima, and spoke with them, as part of efforts to forge friendly relations between Satsuma and the United Kingdom. A number of sons of prominent Satsuma retainers secretly left Japan for England that same year, in order to study Western government, economics, and science & technology, and in order to build agreements and networking. As a result of these relationships, Satsuma exhibited at the 1867 Paris World's Fair separately from "Japan" (i.e. the shogunate), and invited British experts to Kagoshima to help build weaving mills, sugar mills, and other modern industrial establishments.

Tadayoshi also oversaw his domain's involvement in suppressing the 1864 Kinmon Rebellion, supporting the First Chôshû Expedition, and opposing the Second, and then in 1867 gathering an army to march on Kyoto and Edo. Tadayoshi contributed, too, to the Boshin War that followed (in support of the new Meiji government), and was recognized for his contributions and achievements. Following the Meiji Restoration, he went from being daimyô (hanshu) of Kagoshima, to "governor" (chiji), serving in that role until the abolition of the han in 1871.

Unlike many daimyô, who adopted Western/modern ways quite quickly into the Bakumatsu or Meiji periods, Tadayoshi is known for having maintained his topknot (chonmage), samurai dress, and other aspects of samurai lifestyle far into the Meiji period.[6] His residence at Iso, similarly, is very much in the style of traditional Edo period elite samurai architecture and decor, albeit with some modern/Western-style accommodations for entertaining guests.