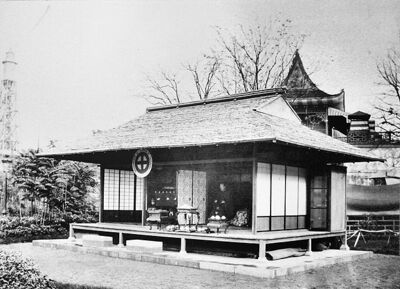 The "Government of the Viceroy of Satsuma of Japan" pavilion at the Fair, as seen in a French photograph.

The seed of the idea that Satsuma might present at the Fair began in 1865, when Godai Tomoatsu, along with two other Satsuma officials, was traveling in Europe seeking to expand Satsuma's commercial ties with European partners. After meeting the Belgian/French merchant Charles Comte de Montblanc and securing an agreement with him for mines, factories, and certain other arrangements in Satsuma, Godai was also offered the possibility of Montblanc helping to arrange for Satsuma to display its products at the Fair, which would be taking place two years later. Originally, the exposition organizers rejected Satsuma's proposal to display separately, but in the end, Satsuma managed to display its goods in the separate display of the supposedly independent Ryûkyû Kingdom.

Senior shogunate official Shibata Takenaka, after running into Montblanc in Paris in the ninth month of 1865, learned of these plans, and was quite angry at this turn of events, as the shogunate had hoped to display Satsuma's goods as part of its own accomplishments.

In 1866/11, karô Iwashita Michihira traveled to Paris as the head of a delegation of Satsuma officials, aboard an English vessel. The domain also sent 400 boxes of local products to Paris, including Ryukyuan textiles, sugar, lacquerwares, and pottery. After arriving in Paris early the next year, Iwashita worked with Montblanc to design and set up the Satsuma/Ryûkyû display, which described its lead patron as "His Highness Matsudaira Shuri no Daibu, Minamoto Shigehisa, Ruler of Ryukyu,"[1] a grand title which made no acknowledgement of Tokugawa authority. The shogunate's delegation, headed by Tokugawa Akitake, younger brother of Shogun Tokugawa Yoshinobu, arrived just before the Fair was to open on April 1, and attempted to convince exposition organizers to incorporate the Satsuma/Ryûkyû displays into the Japanese exhibit. They refused to do so, and when confronted about it, the Satsuma delegates also refused, changing the displayed title to something even bolder - "The Government of the Viceroy of Satsuma of Japan" (Nihon Satsuma taishû seifu) - and handing out medals called Satsuma kunshô to dignitaries such as Napoleon III. The medals bore the Shimazu clan crest on a red five-pointed star, surrounded by a kanji inscription reading "The Country of Satsuma and Ryukyu" (Satsuma Ryûkyû koku). The shogunate displayed its own exhibit under the title "The Government of the Great Prince of Japan" (Nihon taikun seifu).

The French press described the shogunate not as the top or national authority in Japan, but as only one of a number of political entities within a federal Japanese state. The weakened shogunal legitimacy resulting from the separate displays is said to have contributed to France withholding a crucial monetary loan from the shogunate.

The introduction to the West of mikan (mandarin oranges) at this Fair is sometimes said to have been the origin of the British term for the oranges, which they call "satsumas."[2] Samples of Japanese arts & industry at the Fair included woodblock prints by Hokusai.[3]