The Kinmon Rebellion, also known as the Hamaguri Gate Incident, was an attempt in 1864/7 by sonnô jôi extremists from Chôshû to seize control of the Kyoto Imperial Palace; they were successfully stopped by forces from Satsuma and Aizu han.

Following a political shift in shogunate leadership in 1863 in which a more conservative faction gained power, the shogunate turned its attentions away from "expelling the barbarians" and towards concerns over rising threats to shogunate authority from within the realm. A number of Chôshû extremists were expelled from Kyoto at that time; of those who remained or returned, some were killed or captured by the Shinsengumi in the Ikedaya Affair on 1864/6/5. As a result, the Chôshû extremists worked to take military action against Satsuma and Aizu forces in Kyoto.

Chôshû han karô Fukuhara Echigo, Kunishi Shinano, and Masuda Uemonnosuke traveled to Kyoto in 1864/7 with a number of troops, including Kijima Matabei, Kuzaka Genzui and Maki Izumi. On 7/19, they clashed with Satsuma & Aizu troops near the Hamaguri Gate of the Imperial palace. Kijima and Kunishi were killed in the battle. Maki and Kuzaka committed seppuku.

As the Chôshû troops withdrew, they set fires which spread and caused serious damage; the fires came to be called dondon yake. In the aftermath of the event, the shogunate moved to reduce the Môri's holdings by 100,000 koku as punishment, but the Meiji Restoration came to pass before the reduction was put into effect; this was the only time the shogunate attempted to reduce the holdings of a kunimochi daimyô.[1] 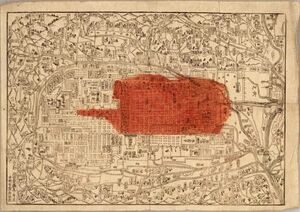 Area destroyed by the fire.