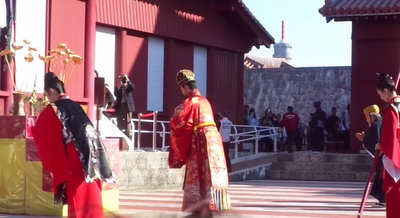 The King bowing to the altar to Heaven, during a modern reenactment of the Ni-nu-faa nu unu-fee ceremony, Jan 1, 2017 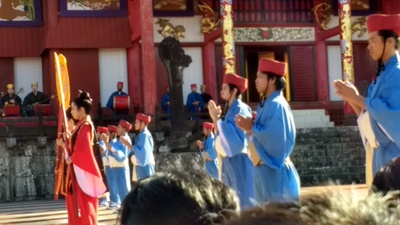 Scholar-aristocrats praying along with the king, during a reenactment of the Ni-nu-faa nu unu-fee ceremony, Jan 1, 2017 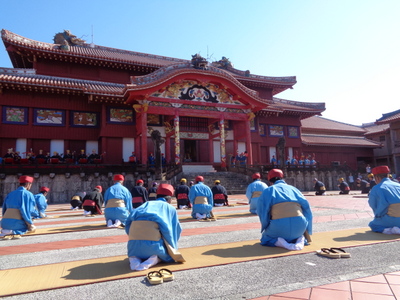 Scholar-aristocrats kowtowing to the king, during a reenactment of the Chô nu unu-fee ceremony, Jan 1, 2017 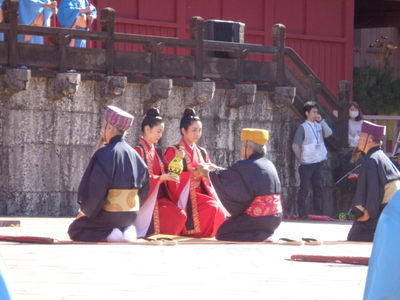 Palace pages (koshô) offering awamori to scholar-officials of the court, during a reenactment of the Ufu-tuui ceremony, Jan 1, 2017

In the Ryûkyû Kingdom, members of the royal family and the scholar-aristocracy of Ryukyu, as well as others associated with the royal court, took part in a variety of ceremonies and observances on certain occasions of every year.

New Year's celebrations included, among other activities, three major ceremonies held in the Unaa (central plaza) of Shuri castle, both on the first day of the new year, and on the 15th. The court busily devoted itself to preparations for new years beginning, particularly, from 12/27.

Beginning early in the morning on the first day of the new year, before dawn, the new Sanshikan royal council for the year officially began their duties. As part of continued preparations for the day's ceremonies, scribes and stonemasons in service to the court performed a ritual sprinkling of white sand in the unaa in front of the dragon pillars around dawn. This was then followed by other palace staff arranging a group of five flags and incense burners within the unaa; offerings to be made during New Year's rituals, including foods and other products from various parts of the kingdom, were also moved from the palace kitchens to the Hôshinmon.

The day's formal ceremonies began sometime after dawn, around what in modern terms would be 8 AM. Music was played, and some 311 individuals associated with the court, from high-ranking ueekata down to commoners, formally departed from the palace in order to offer prayers at the Ryukyu Eight Shrines. Members of the court then prepared for a ritual known (in Japanese pronunciation) as Gokaiin ukishiki (御開御規式); officials of various ranks gathered in the shichagui (first floor throne room), and the Sanshikan took seats below the throne, as the king, in Ryukyuan court costume, formally pressed his seal onto his first work of calligraphy of the year (kissho, 吉書). The king then returned to the shoin to change into Chinese-style court costume.

The first of the three major New Year's ceremonies began shortly afterwards, around what would today be regarded as 10 AM. In this Ni-nu-faa nu unu-fee or Ninufa ugami (子之方御拝) ritual, the king and other members of the royal family, along with members of the court and representatives of the common people, lined up in the unaa and bowed towards an altar, burning incense and offering prayers towards Heaven and the gods. The name of this ritual refers to bowing, worshipping, or making obeisances (御拝) towards the direction of the Rat (子之方), i.e. the North, according to the system of assigning Chinese zodiac figures to the compass directions.

The unaa plaza was paved in alternating rows of red brick and grey gravel, providing "marks" on which officials lined up; the leading officials of the Kumemura community, along with members of the Sanshikan and other top level officials stood in the front row, nearest to the altar after the royal family. Behind them were figures of anji and ueekata court rank, followed by those of peechin, satunushi, and other lower ranks. The officials all faced the Seiden (main palace hall) as the King made a formal appearance, emerging from the central doors of the first floor, accompanied by the banging of a gong and the blowing of trumpets (rappa and dôkaku), and by uzagaku (Chinese-style court music). He then made his way to an altar, located within the plaza and facing the Hokuden, where he offered incense, as all those gathered turned to face North along with the king. The chagushi, a high-ranking Kumemura official, called out the protocols in Chinese, telling all those assembled when to bow, when to raise their heads from the bow, and when to call out "Wansui" (lit. "10,000 years," equiv. to J. banzai). At his instructions, the assembled figures performed a full kowtow (三跪九叩頭, C: sān guì jiǔ kòutóu, J: sanki kyû koutou) towards Heaven and the ancestors, bowing down three times, and within each touching their heads to the ground three times, for a total of "three kneelings and nine knockings of the head." Prayers were also offered to Heaven and to the gods, in celebration of the new year, and in hope for peace and prosperity. The King then returned to the steps at the front of the Seiden and withdrew into the throne room (usasuka), marking the end of the ceremony.

The second ceremony, known by in Okinawan as Chô nu unu-fee (朝之御拝) or also as karafaafû mukigami kishiki (唐破豊向拝規式), took place around noon on the first day of the new year. Court officials lined up in the unaa, facing the Seiden, to pay respects to the king, reaffirming their loyalty and offering new year's greetings to him. Officials lined up within the plaza according to their ranks, with the highest-ranking officials closest to the front, and the lowest-ranking ones at the back. The Sanshikan, on behalf of the entire court, approached an altar directly in front of the steps to the Seiden, lighting incense and offering prayers for the king's long life (wansui) and prosperity. Sliding panels underneath the karahafu gable at the front of the second story of the palace were then opened, revealing the King, on a throne. As in the Ni-nu-faa nu unu-fee ceremony, uzagaku, trumpets, and gongs accompanied the audience. The chagushi served as master of ceremonies, instructing all those assembled, in Chinese, to kowtow to the king, three times (i.e. a full kowtow: three kneelings and nine knockings). The sliding doors under the karahafu were then closed, and the assembled officials withdrew, marking the end of this second ceremony.

The third of the New Year's ceremonies is known as ufu tuui (大通り), and involved the king sharing bottles of awamori with the members of the court, in celebration of the New Year. In today's modern reenactments of this ceremony, doors are opened on the first floor of the Seiden, revealing the king and queen seated on thrones, before a stand bearing bottles of awamori, and drinking cups (historically, the queen did not take part in New Year's ceremonies).[1] After the king and queen drink from the cups, pages (koshô) provide awamori to the gathered officials. A special type of liquor bottle known as utamasuki (御玉貫), covered within a beaded jacket, is used for this ritual purpose. However, according to other sources, this celebration of the new year was held first in the Nanden, on the southern side of the castle's main plaza, and was known as fee nu udun ukishiki (南風之御殿御規式). After changing from Chinese-style court costume into Ryukyuan garb, the king appeared before a group of officials who formally presented him with flowers and awamori. This liquor was then shared with officials gathered in the first floor throne room (shichagui) and with commoners gathered in the unaa, in a ceremony known as mii nu mee jurii, miichi ukazai nu ukishiki (美御前揃三ツ御飾御規式). This marked the end of the formal ceremonies for the day.

On the third day of the new year, the king processed through the streets of Shuri with an entourage of some 300 members of court, to make formal visits to the Buddhist temples of Engaku-ji, Tenkai-ji, and Tennô-ji, where he prayed for the peace and prosperity of the kingdom.[2]

On the 15th day of the new year, the court repeated much the same ceremonies as on the first day, except with the King in Ryukyuan garb instead of his Ming-style court costume.

These ceremonies are annually reenacted at the castle today, albeit on the solar New Year's (January 1st and 2nd), rather than in accordance with the lunar calendar.

In the second month of the year, the king traveled to Kudaka Island or to Bengadake to offer prayers, and on a separate occasion performed ritual prayers for a good harvest. The specific dates of these rituals varied from year to year, depending on which dates were deemed auspicious.

On 3/3, women of the court went down to the beach to engage in purification rituals.

A separate ritual, held on a date judged auspicious, involved prayers for the crops, and expressions of gratitude to the gods for agricultural prosperity.

On 4/1, summer was official deemed to have begun, and members of the court switched from their winter court costume to the summer version.[3]

On another day of the month, a date deemed auspicious, abushibaree was performed; frogs, insects, and other pests were cleaned out of the palace.

On 5/5, or Tango no sekku, purification rituals were performed, with the aim of purifying one's body, and driving out bad things.

On another day of the month, a date deemed auspicious, further prayers were made for the growth of the crops.

On an auspicious day of the month, ceremonies were held in celebration of the fruiting of the crops.

On 7/7 (Tanabata), prayers were made to the spirits of past kings, and members of the court visited various shrines and temples.

On 8/15, people engaged in tsukimi, taking time to appreciate the moon. When a Chinese investiture mission was in residence on Okinawa, Mid-Autumn Festival was celebrated with musical performances, horse races, sword dances, ballgames, and other activities.[5] A temporary stage was set up in front of the Hokuden of Shuri castle for dances and kumi udui theatre performances. This was followed by a banquet, and fireworks.[6]

On an auspicious day of the month, susuki (miscanthus) grasses or other sorts of reeds were used in a ritual to drive out bad spirits, called shibasashi.

In the Amami Islands, many communities celebrate the end of the rice harvest with ceremonies and dances collectively called mihachigatsu. Prayers and ceremonies known as arasetsu, shibasashi, and donga are performed, praying for the ancestors and for good harvests. Hand-drums known as chijin are drummed and hachigatsu odori dances are performed throughout the night. In many communities, this is the most energetic or exciting traditional event of the year.[7]

On 9/9, a purification ritual was performed, in which one purified one's body, and drove out bad things. When a Chinese investiture mission was in residence, Chrysanthemum Festival was celebrated with dragon boat races, followed by a banquet and the performance of six Chinese plays in the Hokuden (North Hall) of Shuri castle.[5]

On an auspicious day within the month, the king visited Futenma Shrine.

On the 1st of the 10th month, the court changed to winter clothes.[3]