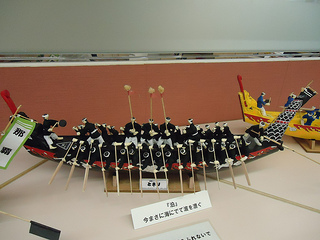 Model of a ha-ri-sen representing Tomari, on display at the Naha City Museum of History.

Known as ha-ri- in Okinawa, the tradition of dragon boat racing has a long history in China, and is practiced today in many places in mainland China, Hong Kong, Taiwan, Ryûkyû, Hawaii, and in Chinese diaspora communities around the world.

The origins of the tradition of dragon boat racing are traditionally associated with the poet Qu Yuan (340-278 BCE)[1], who, distraught at the corrupt state of his government, and having been banished, threw himself into a lake and drowned; the fishermen rushed out onto the lake in their boats, in an attempt to recover his body before it could be eaten by the fish. Thus the tradition of having dragon boat races on the fifth day of the fifth month was, supposedly, born.

In Ryûkyû, dragon boat races have traditionally accompanied numerous festivals, as well as the sending off or welcoming back of important ships. Dragon boats can be seen in many folding screen paintings and other depictions of Naha harbor, featuring the departure or return of, for example, tribute ships. Such races are closely associated with the coming of gods, such as Miruku, from nirai kanai (a land of the gods beyond the sea), who bring with them yugafu (good fortune), as well as with the prayers or hopes for a good catch, or safe voyages at sea.

Today, dragon boat races take place throughout the islands; in many areas, the races take place on or around the 4th day of the 5th month on the lunar calendar, though other areas may have dragon boat festivals at other times of year. While many areas call them ha-ri, they are known by a variety of other names in different areas, including ha-ree in Itoman. Perhaps the largest and most famous set of dragon boat races are those performed in Naha, where the three teams from Naha, Kume, and Tomari traditionally ride in boats of a set color - green, yellow, and black, respectively.[2]