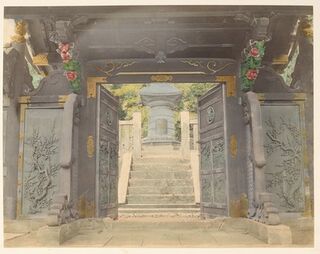 Tokugawa Ietsugu was the seventh shogun, reigning from 1713 until his death in 1716. He was the fourth son of the previous shogun, Tokugawa Ienobu, but was predeceased by all of his brothers, and thus became the one to succeed their father as shogun.[1]

Ietsugu was a very young child for the duration of his brief rule. He was betrothed at the age of seven, in 1715, to Yasunomiya Yoshiko, the two-year-old daughter of Emperor Reigen, but died the following year, before the two were wed.[2]