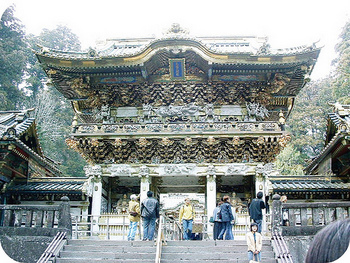 Nikkô Tôshôgû is a Shinto shrine in Nikkô, dedicated to Tôshô-gongen, the deified Tokugawa Ieyasu. Originally constructed in the early 17th century, the many buildings in the complex are the defining example of the elaborately decorative gongen-zukuri architectural style.

One of the most famous sights within the Tôshôgû complex is the Yômeimon, a large karamon ("Chinese gate") loaded with intricately detailed carving and decorative elaboration. Named after one of the gates to the Kyoto Imperial Palace, the Yômeimon includes over 500 relief depictions of animals and people, including ones of elephants, giraffes, and other creatures about which knowledge was surely second or third-hand. Paintings of dragons by Kanô Tan'yû are located inside the gateway.

The five-story pagoda at Tôshôgû was originally built in 1650, destroyed by fire, and rebuilt in 1818.

One of the many large torii on the site bears calligraphy from the hand of Emperor Go-Mizunoo reading "Tôshô Dai-gongen."

The stables at the shrine house a special white horse, closely associated with the Emperor; in recent decades, each successive white horse has been a gift to Japan from the government of New Zealand. The stables also bear, within their carved decorations, what may be the original depiction of the "See No Evil, Hear No Evil, Speak No Evil" monkeys (J: mizaru, kikazaru, iwazaru). The famous monkeys are attributed to Hidari Jingorô.[1]

The site was chosen by Tokugawa Ieyasu himself for this purpose, i.e., namely, the location of a mausoleum and shrine to him as a deified protector of the country. As Nikkô is located directly north of the Tokugawa capital of Edo, some have suggested that the site was chosen as part of a discourse connecting Tôshô-daigongen (the deified Ieyasu) with the North Star, as a protective deity.[2]

Following his death, Ieyasu was first enshrined at Kunôzan Tôshôgû, and then less than a year later his body and spirit were relocated to a shrine at Nikkô, as a result of efforts by the Buddhist priest & shogunal advisor Tenkai. Tenkai also established another Tôshôgû within his Tendai school that same year (1617), and the shogunate established yet another, within the grounds of Edo castle, the following year. Further Tôshôgû shrines were established at Nagoya in 1619 and Mito and Kishû in 1621. Many other daimyô and major Buddhist temples followed suit.[3]

Construction at Nikkô on a fuller, grander, shrine began in 1634 under the third Tokugawa shogun, Tokugawa Iemitsu. This project cost, in the end, some 568,000 gold ryô, 100 kanme of silver, and 1,000 koku of rice. The new structures were among the most ornate in the entire realm, and are decorated with 644 images of animals, 950 of birds, and 1,423 of plants. The expansion project was completed in roughly two years, in time for mourning ceremonies for the 20th anniversary of Ieyasu's death, held on 1636/4/17.[4]

A mission was sent from the Imperial Court in 1646 to visit Nikkô. Shoguns and other members of the Tokugawa family paid formal visits to the shrine as well on seventeen occasions over the course of the Edo period, beginning in 1617 (with most of these visits taking place early on, during the reigns of Tokugawa Hidetada and Iemitsu). Additional "shogunal" visits to the shrine were performed by shogunate officials (kôke, specifically) acting as the shogun's proxy.[5] Further, on several occasions in the 17th century, Korean and Ryukyuan embassies to Edo were obliged to journey to the shrine as well (beginning in the 18th century, they visited Ueno Tôshôgû instead). A visit to the shrine by Tokugawa Ieharu, if it can be taken as typical, involved a nine-day journey, and the shogun was accompanied by roughly 230,000 porters, 620,000 guards, and 305,000 horses.[6]

The shrine has undergone repair and restoration efforts on numerous occasions, including one effort in the 1740s-1750s, in which Miyagawa Chôshun took part.

The complex was divided in three by the Meiji government in 1871 - Tôshôgu and Futaarasan Shrine as Shinto shrines, and Rinnô-ji as a Buddhist temple.[7] This came at a time when a nationalist/Imperial cult of Shinto was being constructed, and the "foreign" religion of Buddhism was losing favor in the government. Matsudaira Katamori became the chief priest of the shrine in 1880.