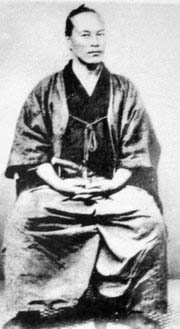 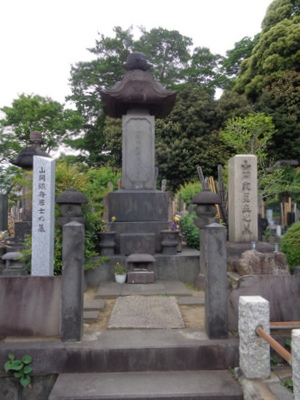 Tesshû's grave at Zenshô-an, in the Yanaka area of Tokyo

Ono Tetsutaro was born as a son of Okura Bugyo Ono Tomoemon and later he was adopted to Hatamoto Yamaoka family. He learned Hokushin Itto Ryu from Chiba Shusaku in Kobusho and became the Kobusho Kenjutsu Sewayaku.

1863, he and Kiyokawa were appointed to be directors of the Roshigumi but Kiyokawa suddenly changed the purpose of the Roshigumi right after when they arrived Kyoto and made all but 24 people return to Edo. In April, Kiyokawa was assassinated and Yamaoka was put in disciplinary confinement. Same time, he met Asari Matashichiro and learned Itto Ryu. 1868/3/9, he visited Saigo Takamori in Sunpu by an order of Tokugawa Yoshinobu, and succeeded to reach the agreement about a basic condition of Edo surrender.

After the Meiji Restoration, he moved to Shizuoka accompanying Tokugawa Iesato.

1872, he became a chamberlain of Emperor Meiji, it was requested by Saigo Takamori. While serving for the Imperial Court, he founded Itto Shoden Muto Ryu Kenjutsu.

1888, he died of Stomach cancer. His grave is in Zensho-an, the temple was established by himself to condole people who died for the Meiji Restoration in 1883.

This article is a rough draft which is in need of cleanup (grammar, spelling, corrections, links, formatting, etc.). You can help SamuraiWiki by editing it. Click here for a list of articles that have been tagged as a draft copy.
Retrieved from "http://samurai-archives.com/w/index.php?title=Yamaoka_Tesshu&oldid=36725"
Categories: