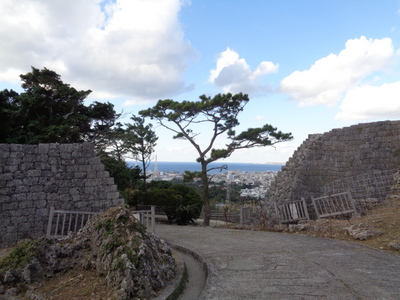 A section of the walls of the castle

Urasoe castle was an Okinawan castle, or gusuku, which served as the capital of the medieval Okinawan principality of Chûzan prior to the unification of the island into the Kingdom of Ryûkyû, and the moving of the capital to Shuri.

In the fourteenth century, Urasoe was the largest castle on the island, but today little remains.

The castle ruins lie behind the modern city of Urasoe, on the northern edge of Naha, today the capital of Okinawa Prefecture. It takes its name from the notion of ruling (soe) all the many various towns and villages (uraura, lit. "inlets" or "harbors").[1] The castle sits roughly 130-140 meters above sea level, and consists of two sections, arranged for the most part along a northwest-southeast axis. The Kogusuku (old castle) and Migusuku together cover an area roughly 380m long by 60-70m wide, the kogusuku being on a slightly higher rise to the east of the migusuku. A series of interconnected enclosures cross the site from east-west.

The compound included a pair of wells called kagan-ukaa and kara-ukaa, and a stone associated with Minamoto no Tametomo, called hanarijii.[2]

As much of the site has been extensively damaged, both historically and more recently, the overall size, layout and structure of the castle is difficult to ascertain, along with many other aspects of its history and use.

A series of four separate ramparts and palisades defended the lower portion of the castle, along with a moat that has been dated to the late 14th-early 15th century. The upper portion of the castle, like many other gusuku, was situated in such a way that it was sufficiently defended by sheer cliffs and the sea and likely lacked significant defensive walls or ramparts.

The former sites of oldest Buddhist temple in Okinawa, the Gokuraku-ji (relocated several times and renamed Ryûfuku-ji in the late 15th c.), are nearby, along with Urasoe yôdore, the royal mausolea of several kings of Chûzan, dug directly into the cliffside.

King Eiso (r. 1260-1299) ruled from Urasoe, and is entombed at Urasoe yôdore, near the northwest cliff of the castle. His mausoleum contains three stone coffins from China, possibly from Fujian; it is believed that Eiso is buried in the largest one, his father and grandfather in the other two. The coffins are decorated with birds, flowers, deer, shishi (lion-dogs), and various Buddhist images, along with dragons and phoenixes on the lids, which are designed to look like tiled roofs. Though Eiso lived in the 13th century, however, based on the style of designs and decorations on the coffins, archaeologists believe these to be of later, 15th century, construction. King Shô Nei (r. 1597-1620), is also entombed here.

Excavations in the last decades of the 20th century uncovered a ceremonial path leading from the castle to the tombs, along with the remains of an artificial lake, a tunnel entrance to the castle, and a series of residences believed to have belonged to a noble family. Over 30,000 artifacts were recovered from these excavations.

As royal capital, Urasoe represents the first instance of a major shift in the construction of elite structures, and castles (gusuku) in particular, in Okinawa. It is believed to have been grander in scale and complexity than sites which came before. Most of what is known about the castle's history comes from archaeological excavations, and not from narrative historical documentation.

Low stone walls and post-holes indicate the original form of the castle, constructed in the late 13th century, possibly by King Eiso, who was born at Iso gusuku, and who is also credited with the construction of the royal tombs at Urasoe yôdore and the temple of Gokuraku-ji. During the reign of King Satto a century later, the castle was expanded, and came to encompass what is today labeled the kogusuku. Korean roof tiles were used in the expansions and construction at this time.[2]

It is unclear whether Satto then relocated the capital to Shuri, building Shuri castle by 1372 or 1392, or whether it was not until the reign of King Shô Hashi in the 1420s, that this took place.[3] In any case, Urasoe castle was then either simply abandoned to ruin,[2] or according to some accounts, burned down in 1406.[4] Significant portions of the castle were taken away to aid in the construction of Shuri castle. Shô Iko, the son of King Shô Shin, took up residence at Urasoe, however, in 1509. Finding it largely in ruins, he oversaw its refurbishment, and it is believed he moved the residential section of the castle from the kogusuku to the migusuku at this time.

The castle was burned and destroyed in the 1609 invasion of Ryukyu by Satsuma, along with the Ryûfuku-ji temple which sat below it on the hillside.

Many scholars have traditionally seen the establishment of Shuri as royal capital as bringing with it great changes and developments in the representation of the monarchy. However, some scholars today believe that "the form for the royal capital at Shuri, which included a central palace (seiden), a plaza for gathering allied elites and subjects, a ritual area, a large external pond, and attached Buddhist temples, was already complete at Urasoe"[5]. Archaeologists point out in particular the wealth, power, and aesthetic grandure indicated by elements of the site's structures. Roof tiles and other items, mostly ceramics, were imported from Korea, and stone coffins carved in the Chinese style, likely in Fujian, were also imported, indicate the tiny kingdom's extensive trade and diplomatic connections; items from Korea, in particular, are known to have been quite rare and expensive in Okinawa for many centuries, and have been exacavated only in the most elite of sites. The Buddhist temples on the site indicate strong political and cultural connections to Japan, and the large pond or lake below the castle is a common symbol of elite power and prestige throughout East Asia.

The grave of Iha Fuyû, the "father" of Okinawan Studies, is located within the castle grounds.[2]