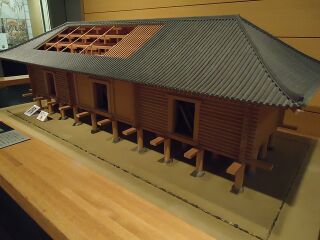 A model of the Shôsôin, at the National Museum of Japanese History

The Shôsôin is an Imperial repository located at Tôdai-ji in Nara. Constructed by Empress Kôken during the Nara period, it is not only an exceptional example of 8th century azekura storehouse architecture, but contains more than 9,000 items from the period, including textiles, musical instruments, aromatic woods, pieces of glass, and game boards, many of them of Silk Road origins and bearing Persian design elements or evidence of Roman manufacture.

The Shôsôin was established in 756 to house a collection of treasures belonging to the late Emperor Shômu, who had died 49 days earlier.

At times, the storehouse went unopened for decades or even over a century; when it was opened in 1833, it had been 140 years since it had last been opened. In addition to heavy metal locks holding the doors closed, those locks in turn are ceremonially sealed with ropes and paper inscribed with imperial orders; the storehouse could not be opened except by imperial order.[2]

Though associated directly with Tôdai-ji for over a millennium, the storehouse was placed under the authority of the Ministry of the Interior (Naimushô) in 1875, and in 1884 under that of the Imperial Household Ministry. The Imperial Household Agency (Kunaichô) continues to oversee the site and its collection today.

The objects were never publicly shown before 1947, when art historian Sherman Lee conducted a survey of the collection and convinced the Japanese government to allow such an exhibition. Objects from the Shôsôin have been shown annually ever since, and at least since the 1990s, this exhibition, held at the Nara National Museum, has regularly been the most-attended exhibition in Japan, and frequently among the top ten in the world.[3]

Today, the Shôsôin collection is stored in two modern storage facilities constructed in 1953 and 1962. The original wooden building was designated a World Heritage Site in 1998, as one of the "Historic Monuments of Ancient Nara."

Selected Objects in the Shôsôin Collection