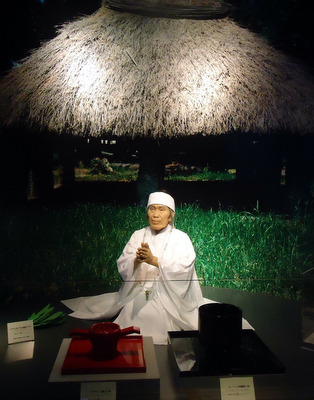 Noro were Ryukyuan village priestesses, who performed a variety of rituals and ceremonies for the people of the area, as well as watching over local utaki. Most magiri had several noro.[1] Though there is some overlap or conflation today between individuals identifying themselves as noro, yuta (spirit mediums), kaminchu (person of the spirits), or by other terms, noro historically were officially appointed and belonged to a set hierarchy.[2]

Prior to the 16th century, noro had considerable local power. In the 16th century, however, King Shô Shin significantly reduced the noro's power, establishing a new hierarchy of priestesses, more closely controlled by the government, and headed by his sister, the kikoe-ôgimi.[3] Under this new system, noro were appointed and granted land in each magiri; this remained a rather prestigious position, however.[4] They often had their own assistants, called ucchigami (控神) in the case of male assistants, and niigami (根神) in the case of female ones.[1]

Their homes, known as nuru nu dunchi, were typically just the same as other private homes in the village, with the difference of the inclusion of a shrine to the fire spirit (hi nu kan).[1]

Kagoshima domain attempted to sever the connections between the royal court at Shuri and the noro in the Amami Islands (brought under Kagoshima's control after 1609), but ultimately relented in the face of powerful resistance. Even during this period of political division, and even despite the history of conflict between the Amamis and Shuri, noro continued to travel to Shuri to seek official appointment from the king, down into the 18th and 19th centuries.[5]

The formal system and hierarchy of noro disappeared with the abolition of the kingdom in 1879; though some still identify as noro today, particularly on Kudaka Island, they are no longer appointed by any central authority or belong to any state-related or otherwise political hierarchy.[6]