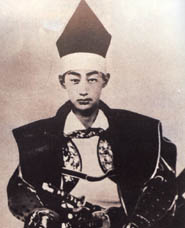 Matsudaira Katamori was the ninth Edo period lord of Aizu han, and a prominent figure in Bakumatsu period politics.

Katamori was the sixth son of Lord Matsudaira Yoshitatsu of Takasu han. He was adopted by Matsudaira Katataka of Aizu han in 1846, and became lord of Aizu in 1852 upon Katataka's death.

On 1862/int.8/1, he was appointed to the position of Kyoto shugo shoku (Military Commissioner of Kyoto) and took 1000 Aizu samurai to Kyoto later that year. While in Kyoto, he made efforts to support the unification of the imperial court and the shogunate (Kôbu gattai) and used the Shinsengumi to maintain public peace.

In summer 1863, he succeeded in expelling Chôshû han lobbyists from the imperial court and gained the trust of Emperor Kômei.

In 1867, Shogun Tokugawa Yoshinobu returned political power to Emperor Meiji and the position of Military Commissioner of Kyoto was abolished.

The Battle of Aizu

Katamori left Kyoto during the Battle of Toba-Fushimi with Shogun Yoshinobu and returned to Aizu. Pro-Imperial troops defeated Tokugawa troops in the Battle of Ueno and headed north several months later. The domains in the northern provinces then allied together against the pro-Imperial troops which were mainly from Satsuma han and Chôshû. However some domains went over to the pro-Imperial side; most ultimately surrendered before Aizu did.

After the Boshin War, Katamori confined himself until 1872 and became the chief priest of Nikkô Tôshôgû in 1880.

Katamori died of pneumonia in 1893.