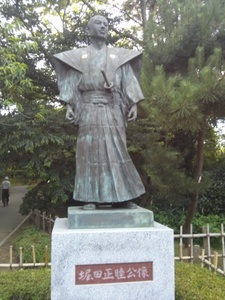 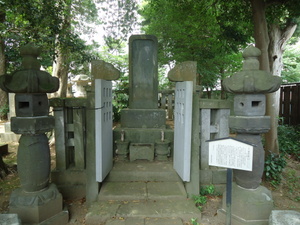 Grave of Hotta Masayoshi at Jindai-ji in Sakura, Chiba.

Hotta Masayoshi was a daimyô of Sakura han (Shimousa province), and head of the rôjû, famous as the chief Japanese official involved in negotiating the 1858 Harris Treaty (US-Japan Treaty of Amity and Commerce), which opened four Japanese ports to foreign commerce, and granted a degree of extraterritoriality to foreigners in Japan. Known as Hotta Masahiro for most of his career, he changed his name to Masayoshi in 1856.[1]

Masahiro became lord of Sakura in 1825, and after stints as sôshaban (1829-?), jisha bugyô (Magistrate of Temples & Shrines, 1834-1837), and Ôsaka jôdai (castellan of Osaka castle on behalf of the shogunate, 1837-?),[2] he was eventually named a rôjû, and then, in 1855, became head of the rôjû (rôjû shuza). Just prior to that, in 1854, he was promoted to tamari-tsume daimyô.[3] Masayoshi was appointed gaikoku-jimu-toriatsukai (essentially, "foreign minister") in 1856, and in opposition to certain other prominent figures in the Tokugawa shogunate, took a stance that Japan needed to engage more actively and openly in foreign intercourse in order to prosper. He thus negotiated the terms of a treaty with US Consul Townsend Harris, resulting in the signing of the treaty on 1858/6/19. He was dismissed from his position as one of the Rôjû several days later, on 6/23.[4]

Nevertheless, recognizing the momentous change this Treaty would bring, Hotta took the unprecedented step of traveling to Kyoto, prior to the signing of the treaty, and formally requesting the Emperor's approval; Emperor Kômei explicitly voiced his disapproval with signing such Treaties with the Western powers, and further expressed his disapproval for Masayoshi & Ii Naosuke's choice for shogunal heir, Tokugawa Iemochi, expressing his support instead for Tokugawa Nariaki's son Tokugawa Yoshinobu to become the next shogun.

Though the Treaty was signed, and Iemochi named Shogun, Masayoshi was removed from his position as part of the Ansei Purges in 1858-1859, as a result of his role in this disastrous political misstep. He then returned to Sakura, where he died 1864/3/21. He is buried alongside his predecessors at the Hotta clan cemetery at Jindai-ji, in Sakura City.