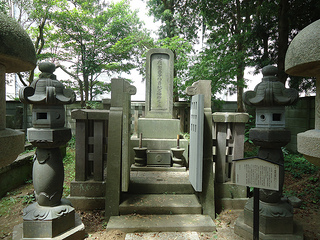 The grave of Hotta Masatomo, at the Hotta clan cemetery at Jindai-ji in Sakura, Chiba.

Hotta Masatomo was the last lord of Sakura han in Shimousa province (today, Chiba prefecture). He is known for the lavish traditional-style mansion he constructed in Sakura, which still stands today.

Masatomo was the fourth son of Hotta Masayoshi, the rôjû (shogunate Elder) famous for his role in negotiating the Harris Treaty. Following the abolition of the han, Masatomo was named a Count, and was obliged to relocate to Tokyo.

Once he was able to return to Sakura, he became an advocate for regional (rural) industry and development; Sakura castle having been converted into a military base, he built a mansion on the other side of the city in 1890, and developed an agricultural experimentation operation on the lands adjacent to the mansion in 1897. The experimental station remained a prominent site for such activities for twenty-five years, before an official prefectural agricultural testing station was established. Masatomo was also very active in contributing to the construction of Western-style schools in the region.

He is buried alongside his father and ancestors at Jindai-ji, a temple in Sakura City.