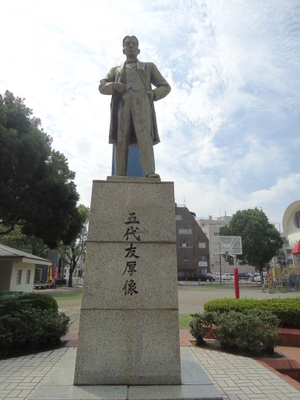 Statue of Godai in Izumi Park in Kagoshima

Godai Tomoatsu was a Satsuma han retainer prominent in the Bakumatsu period as an economic/commercial policy advisor, and agent of the domain in overseas agreements and transactions. He was the son of Godai Hidetaka, a Confucian scholar whose advice on foreign relations was influential in domainal policy in the 1840s.

Tomoatsu was born in 1836, in the Jôgadani neighborhood of Nagata-chô, in the castle-town of Kagoshima. As a youth, he is said to have taken a great interest in the outside world, copying world maps and constructed globes, and in 1857 he journeyed to Nagasaki to study there.

Tomoatsu then traveled to Shanghai in 1862 as a member of an official shogunate mission, aboard a ship called the Chitose-maru. During his time there, he arranged with Scottish merchant Thomas Glover for the domain's purchase of a steamship.[1] According to some sources, this was a German ship, and Tomoatsu quickly became its captain.[2] The following year, during the Anglo-Satsuma War, he was captured and taken back to England as a prisoner.[2]

Godai would later claim that his experiences as a student in Nagasaki and in Shanghai, and his experiences being in contact with the British during the Royal Navy's 1863 bombardment of Kagoshima (also known as the Anglo-Satsuma War) gave him a new perspective in admiring the accomplishments of Western nations. As a result, he suggested to the domain leadership the following year a plan to increase domainal revenues by shipping products from Ezo, such as kelp, along with rice, raw silk, and the like directly to Shanghai. This was presented as a radical new idea, but in fact was well in line with what the domain had already been doing, albeit within Japan.

In spring 1865, Godai helped organize a European tour for Niiro Hisanaga and 17 other young men from Satsuma, traveling with them to Britain, Belgium, France, and Prussia, visiting factories and purchasing industrial equipment and arms. While on this trip, he went by the name Seki Kenzô. He signed an agreement with Belgian/French entrepreneur Charles Comte de Montblanc later that year in which Montblanc would contribute to opening mining operations in Satsuma, along with factories to produce steel, weapons, textiles, and tea. The agreement also involved opening three ports in Ryûkyû, and having Montblanc facilitate the display of the domain's products at the 1867 Paris World's Fair.

Returning to Japan in 1866/3, Godai met with Chôshû han officials in the tenth month of that year to negotiate arrangements for closer commercial ties between the two domains. Around the same time, he was named konando bugyô (a close personal aide to the lord of the domain), and began to play a prominent role in the domain's naval affairs, including overseeing the construction, in Satsuma, of Japan's first modern shipyard.[2]

Following the Meiji Restoration, Godai served briefly in government before leaving for the private sector. He played a prominent role in the modernization of Japan's economy, and served as the first head of the Osaka Chamber of Commerce and Industry (大阪商法会議所会). He died of illness in 1885, at the age of 49, and was buried at Abeno cemetery in Osaka.[2]