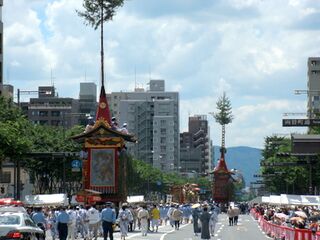 Gion Matsuri, which takes place in Kyoto in mid-July each year, is one of the most famous traditional festivals in Japan. It was first started in 863 to pray for the suppression of an epidemic, and became a yearly festival in 970.

The festival consists primarily of a parade or procession through the streets of Kyoto. Thirty-two parade floats, known as yama or yamaboko process in a square-shaped route, beginning on Shijô-dôri, then turning left onto Kawaramachi-dôri, left onto Oike-dôri, and finally left onto Shinmachi-dôri. Most are carried by a large group of people, in a manner similar to that of omikoshi (portable Shinto shrines), while some of the most impressive floats are pulled along on massive wooden wheels by tens of people pulling ropes.

Each float is based in a neighborhood within that square; in the week or so prior to the parade, festivalgoers can visit the floats as they are being (re)constructed, and in the last few evenings prior to the parade, stands are erected, selling food, drink, and various goods.