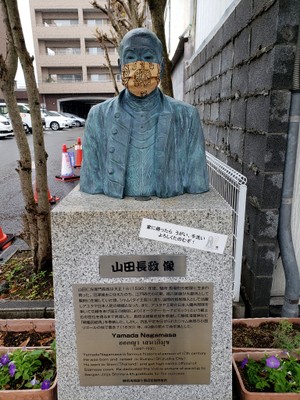 Bust of Yamada Nagamasa in the shôtengai main street approaching Sengen Shrine in Shizuoka City. Wearing a facemask during the Covid-19 crisis of 2020.

Yamada Nagamasa was a leader of the Nihonmachi (Japantown) in early 17th century Ayutthaya (Siam), and of a Japanese contingent of the Siamese royal guard. Nagamasa led some 700 men (roughly half the Japanese population of the city) in suppressing rebellions and defending the kingdom against Burmese invasions, and by 1630 enjoyed high court rank, among other privileges. He served as governor of two provinces, and held a monopoly on managing trade in deerskin and certain other commodities.[1] His prominence made him a target, however, for Prasat Thong, who saw Yamada as a threat, or obstacle, to his plans to seize the throne. In 1630, Prasat Thong assassinated Yamada with a dose of poison, and then burned down the Nihonmachi in order to eliminate any further Japanese threat to his rule.

Born the son of a knife-maker in Sunpu in 1590, Yamada was not of samurai status. According to some sources, his mother may have been from a village called Warashina, near Sunpu, the daughter of Terao Sodaiyu; Nagamasa's father may have been Koya Kyuheiji, Nizaemon, or Kyuzaemon, a man associated in some way with Ise Shrine.

Yamada, originally known as Nizaemon, lost his father while still a child, and after studying at the Meisetsu Rinzai Zen temple for a time, he earned a position at age 16 as palanquin-bearer for Lord Ôkubo Jiemon of Numazu castle. When Lord Ôkubo passed away with no male heirs, however, the domain was confiscated by the shogunate, and Yamada was forced to return home; there, he found that his mother had died as well, and that the family had sold the house and moved to somewhere in the North.

Yamada then made his way to Siam. It is unclear when this took place, or aboard what type of ship. Historian Cesare Polenghi writes that Nagamasa found a job as a dockworker in Sakai, joined the crew of a red seal ship bound for Siam in 1612, and arrived in Ayutthaya some ten weeks later, after stopping at a number of other ports.[2] However, Polenghi also writes that "the year of Nagamasa's departure [from Japan] is not known,"[3] and that it can only be estimated based on Dutch East India Company factor Jeremias van Vliet having indicated that Nagamasa's Siamese-born son Oin (aka Ockon Senaphimuk) was about eighteen years old in 1630. Polenghi then suggests a number of different possibilities for Nagamasa's arrival in Ayutthaya, including having traveled there on a Japanese ship, on a European ship, or via elsewhere in Southeast Asia.[3]

Once in Ayutthaya, Kiya Kyûzaemon, head of the Japantown, took Yamada under his wing. Yamada also began studying Siamese and at least one European language, and soon found a job working as a middleman in the lucrative deerskin trade. At some point while in Siam, or perhaps during his time in Sakai, Yamada Nizaemon took on the name Nagamasa.

At one point, Yamada traveled to the northern borders of Siam, and volunteered to help fight alongside Siamese warriors against a Burmese invasion. Killing the Burmese general, he found himself invited to the royal palace by King Songtham, and granted aristocratic title. When Kyûzaemon decided to return to Japan, he named Yamada his successor; by this time, Yamada had become a head of the royal guards, and a wealthy merchant in his own right, even owning his own ship. Kyûzaemon last appears in the historical record in 1619; it is unclear precisely when Nagamasa succeeded him as head of the community, but it must have been sometime between 1619 and 1621.[4]

In 1621, now serving as head of the Nihonmachi and acting as representative of the royal court, Nagamasa sent three letters to Shogun Tokugawa Hidetada and two of the rôjû, in advance of Ayutthaya sending an embassy to Edo to negotiate for formal relations. This marks the first time anyone in the shogunate heard of (or from) Nagamasa, and as a result of Ishin Sûden investigating the identity of this mysterious "Yamada Nagamasa" and then recording it in his Ikoku nikki, it also marks Yamada's first appearance in official shogunate documents.

By 1624, Nagamasa was wealthy enough to purchase his own ship, which he sent to Nagasaki in the hopes of obtaining a shuinjô (red seal license). He was not granted one until a full year later, however, and so his ship remained in Nagasaki harbor, finally returning to Ayutthaya in 1626. Nagamasa was able to secure some space on a Dutch ship to send a load of deerskins to Nagasaki on commission (i.e. in his own name, for his own profit), and also to send his own ship the following year, in 1627. On this latter journey, the ship was captured by the Dutch, but once Jan Pieterzoon Coen, governor of the Dutch East Indies, realized whose ship it was, he granted Nagamasa a license to trade in Batavia (Jakarta) and sent the ship freely back to Ayutthaya; Nagamasa sent a load of gifts to Batavia in response, and for the next year or two enjoyed a friendly and profitable personal trading relationship with the VOC. His ship traveled to Japan for the third and last time in 1629, after which it returned to Ayutthaya once more.[5]

When King Songtham fell ill in 1628, he named a relative, known as the Kalahom (a military title), along with Yamada, to serve as regents for his underage successor. The Kalahom then began engineering the deaths of his political rivals, eventually ending in the death of the young king in 1629; when a rebellion arose in the southern province of Ligor, the Kalahom suggested that if Yamada led forces to suppress the rebellion, he could then become lord of that province. Yamada succeeded in this endeavor, and established himself and his Japanese compatriots as rulers of Ligor. In the meantime, however, the Kalahom seized the the throne, naming himself King Prasat Thom.

Yamada married a young woman from the royal family, and set himself to ruling his new territory. However, acting as an agent of Prasat Thom's agendas, his new wife poisoned him, applying poisoned plasters to a leg wound Yamada suffered while suppressing the rebellion. He died shortly afterwards, in 1630.

Nagamasa's son Oin succeeded him as king of Ligor, and as head of Nagamasa's army of Japanese forces. Before long, however, amid local uprisings, Oin and his men fled to Cambodia, possibly merging into the Japanese community there. Meanwhile, Nagamasa's red-seal-licensed junk returned to Ayutthaya from its last trip to Japan; Prasat Thong attempted to have the ship seized, and the people of the Nihonmachi opposed him. Whether in the conflict over this particular incident, or due to Prasat Thong's fears of Japanese opposition or rebellion more broadly, the Nihonmachi was burned down. Some sixty or seventy members of the community fled to Japan, while the rest remained, and rebuilt, under a new headman, Iwakura Heyemon.

The next few years brought numerous difficulties and conflicts for the Japanese community of Ayutthaya. Conflict between the resident Japanese and royal forces in the immediate aftermath of the burning of the Japantown culminated in a naval battle, and in some number of Japanese fleeing overseas to return to Japan. Later that same year, the Cambodian navy attacked Ayutthaya, quite possibly with the help of Oin and his men (formerly, Nagamasa's men). Many of the men, and other members of the Japanese community, were slaughtered by Prasat Thong's royal forces, but some number of them switched sides and rejoined the royal guard.

Some number of Japanese returned to Ayutthaya directly from Ligor, and though Prasat Thong's efforts to reverse his policies and welcome them in 1632 did not see much of a lively response, from 1633 onward the community gradually began to recover.

Nagamasa was a prominent figure in patriotic culture of the 1940s. He was featured in Noh plays, patriotic songs, and history textbooks, in which he was represented as a pioneer, who contributed great things to "the southern countries," by virtue of his Japanese military ability; his role in Southeast Asia was thus used both as precedent for Japanese involvement in bringing benefit to those areas, and thus in supporting justification of expansionism. No fewer than three biographies of Nagamasa were published in the 1940s in Japan.

Following World War II, a number of works were published both in Japanese and English criticizing the 1940s interpretation of Yamada Nagamasa as a figure, and at times even questioning whether he existed at all. Though Nagamasa has very much faded today into being a rather obscure and peripheral figure in mainstream discourses on Japanese history, scholars today generally agree that he was real, however.