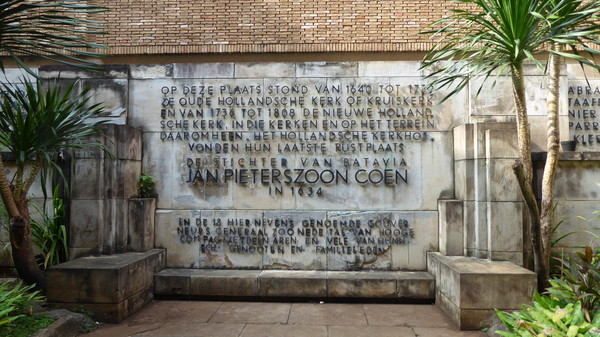 Jan Pieterzoon Coen was a 17th century governor-general of the Dutch East Indies.

He was preceded in that position by Pieter de Carpentier. Coen has been famously quoted as saying there can be no trade without war, and no war without trade. He led the Dutch East India Company in violently seizing the city of Jakarta in 1619, burning down much of the city and driving out many of the residents, in order to establish the city (now renamed Batavia) as the chief base of Dutch operations in the region. A year or two later, with the help of some 80-100 Japanese mercenaries, Coen oversaw the massacre of some 15,000 people in the Banda Islands, in the process of claiming those islands, and their valuable nutmeg trees, for the Company.

Following a failed diplomatic mission to Edo led by Pieter Nuyts in 1627, Coen attempted to reconfigure Company diplomatic efforts. He reportedly thought, if the Tokugawa shogunate had rejected embassies from Batavia, refusing to recognize the Company as a sovereign entity or legitimate diplomatic partner, perhaps letters sent in the name of the "King of Holland" would garner a better response. However, Coen died before he was able to undertake this effort. He was succeeded as governor-general of Batavia by Jacques Specx, who had previously been the Company's first factor (opperhoofd) at Hirado.

Following his death in 1629, Coen was initially buried at the Batavia City Hall; in 1634, his remains were relocated to the nearby Old Dutch Church. According to some accounts, his remains were later moved yet again, by angry Indonesians or otherwise, to an unmarked burial at a new, unknown, location.