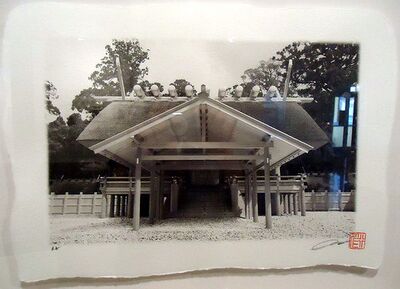 The main worship hall of the Geku (Outer Shrine), shortly after its rebuilding in 2013

Ise Shrine, located on the Kii peninsula in central Honshû,[1] is the most sacred shrine in Shintô. Associated with the sun goddess Amaterasu, and holding the sacred mirror Yata no kagami, one of the Three Imperial Regalia, the shrine is also strongly associated with the Imperial line.

According to tradition, the shrine at Ise dates back to at least the 1st century CE, if not earlier. Much of the shrine's ritual practices today regarded as "traditional," however, including the division of rituals into those of the inner shrine and those of the outer shrine, and the practice of having daughters of the Imperial family serve as shrine priestesses at Ise, date to the 670s-690s.[2] Meanwhile, many other "traditional" practices associated with the shrine are actually modern inventions of the Meiji period.

Ise was an extremely popular destination for pilgrimage during the Edo period, with perhaps as many as three to four million people (more than ten percent of the entire population of the archipelago) setting out for Ise in any given year in the 18th to early 19th centuries. In a few peak years, as many as ten million people (one-third the population of the realm) may have set out on okage mairi ("pilgrimages of gratefulness").[3] Pilgrimage was often an excuse, however, for simply obtaining the licenses to travel, and many people who claimed to be making pilgrimage to Ise in fact traveled elsewhere; even among those who did make it to Ise, the pleasure district of Furuichi was a powerful draw, revealing that this was for many people more about recreational travel or tourism than about devout religious pilgrimage. 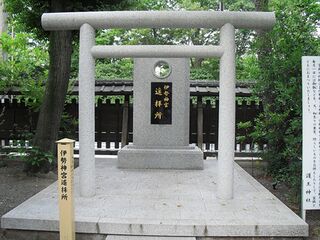 A yôhaisho at Goô Shrine in Kyoto, for worshiping "at" Ise, from afar

While the Shrine has retained a strong Imperial association throughout its history, much surrounding that association today is a product of State Shinto as constructed in the Meiji period or even as late as the 1930s. In the Edo period too, Ise was a shrine dedicated to Amaterasu and Toyouke Ômikami, but as gods of plentiful harvests and of prosperity, but Amaterasu's connection to the Imperial lineage was not emphasized. While certain portions of the shrine are accessible only by the highest priests and by the Emperor himself, the Meiji Emperor (r. 1867-1912) was the first Emperor to visit the shrine in person since Empress Jitô (r. 686-697), over one thousand years earlier. During the intervening time, emperors worshipped Ise only "from afar" (yôhai).[4]

Traveling Ise priests known as onshi or oshi journeyed around the archipelago selling or giving out amulets, giving sermons, and performing prayers and rites for those who asked them to do so. These onshi, and various folk practices and beliefs associated with them, were abolished in the Meiji period, and Ise's association with the Imperial lineage became emphasized, with Imperial visits to the Shrine, and with the establishment of numerous Amaterasu shrines and Ise yôhaisho (worship-from-afar sites) across the country.[5]

The shrine is sometimes said to have been established in the first century CE;[6] other sources place it at least a few centuries later.[7] The actual buildings which comprise the shrine have for centuries, however, been frequently rebuilt, making the question of dates somewhat more complicated. In recent centuries, the pattern has been to rebuild once every twenty years; the shrine was thus reconstructed in 2013, and before that, in 1993. For over one hundred years during the Sengoku period, from 1463 to 1585,[8] the practice of reconstructing the shrine was discontinued due to the inability of the embattled Imperial institution to fund it; however, in the late 16th century, Oda Nobunaga, Toyotomi Hideyoshi, and Tokugawa Ieyasu each in turn contributed significantly to funding the reestablishment of the custom.[9] The practice of rebuilding the shrine is generally said to be chiefly associated with Shinto beliefs about spiritual corruption, and purity. The impermanence of the structures also helps emphasize the idea that it is the kami that is the object of worship here, and not the buildings themselves which should be sacred or treasured due to their age or historicity.[10]

While tradition would have it that the techniques, materials, and tools are unchanged going all the way back to the 7th century (if not earlier), scholarship suggests that they have, indeed, changed, as all traditions change over time. Yet, nevertheless, the belief or perception that the shrine remains the same, the tradition unbroken, is of importance.

The shrine structures are rebuilt using some 800 cubic meters of virgin cypress (J: hinoki) wood from old-growth forests, and in concert with a variety of rituals, festivals, and ceremonies known as shikinen sengû ("relocation of the shrine in festival years"), including festivals associated with the felling and transportation of the logs to the shrine site. A grove of cypress trees was planted in the 20th century with the intention that it help ensure sufficient lumber for the next 200 years of shrine reconstructions. The innermost structures are not simply demolished and rebuilt on the same site, but are instead newly constructed on an adjacent site, to form a duplicate of the 'old' structures, which are then demolished. The 'old' site is covered over with gravel, and only one pillar of the old structure, a so-called "heart pillar" (shin-no-mihashira), is retained, and sheltered under a small shed built for that purpose. In this way, the shrine buildings actually alternate between two plots of land as they are rebuilt every twenty years. Wood from the old shrine is then used to rebuild or repair shrines all across the country.

Special purification rituals are performed on the site of the new reconstruction before any other activities are done there; the scheduling of this ritual is decided by the Emperor himself. The construction itself is done using traditional methods, known and passed down by a specific group of Ise miya-daiku (shrine carpenters). Recently, concerns have grown that these traditional craft skills, as particular to Ise, may be in serious danger of dying out before the shrine is rebuilt once again, in 2033.

The actual transfer of sacred objects, and of the gods themselves, from the old site to the newly rebuilt shrine, is performed in pure darkness. All artificial lights are extinguished, and a series of white cloths and curtains are used to further hide the ritual from view. This darkness is said to evoke or reference the darkness of the legend of Amaterasu in the cave. At around 8 PM, a rooster is made to crow three times, signalling the beginning of the ritual, and the priests carry the sacred objects from one site to the other in complete darkness. In fact, all the most important rituals at Ise are performed in darkness, adding to the mystery and secrecy, and thus protecting the sacredness of the rituals.

Kagura is performed in conjunction with the transfer ceremonies.

The Ise Shrine complex can be roughly divided into two parts: the Naiku (Inner Shrine) and Geku (Outer Shrine). Each of these two parts consists of numerous shrine buildings and sacred spaces. Many other related small sacred spaces and structures are also scattered throughout the surrounding area. A bridge over the Izusu River known as the Uji Bridge (or Ujibashi)[11] is often said to mark the border between the mundane and sacred worlds.

The Geku, dedicated to Toyouke Ômikami, god of abundant food, was originally not associated with the Amaterasu shrine, but the two were combined in the 9th century.

The Naiku, dedicated to Amaterasu Ômikami, and also known as the Kôtai Jingû ("Shrine of the Imperial Great Goddess"), consists of roughly 120 separate shrines, with the most sacred, and most restricted, at their center. A lengthy prescribed path leads to the Inner Precinct, along a series of bridges and roads or paths which lead one through a series of torii. The entrance to the most restricted area is blocked off simply by a silk curtain; only high-ranking shrine priests and members of the Imperial family are permitted to enter beyond this curtain. Even beyond that point, however, access remains proscribed according to hierarchical status. Only the reigning emperor is permitted to enter the innermost shrine building, the shôden, while other members of the Imperial family keep a distance in accordance with their familial distance from the Emperor.

The shôden exemplifies shinmei-zukuri, the most classic style of Shinto architecture. It stands three bays wide by two bays deep,[12] or roughly 15 x 10 meters. It is supported on pillars set directly into the ground, without a foundation. The thatched roof bears perhaps the most distinctive feature of this style: a pair of chigi, wooden beams which stick up out of the roof at a sharp angle, forming essentially an X-shape with the triangle of the roof itself. These are quite commonly seen on Shinto shrines throughout Japan, and rarely if ever on Buddhist structures. The shôden is arranged lengthwise within the precinct, and is approached and entered via a covered staircase. The Inner Precinct consists solely of this central shôden, and two small treasure houses, located to either side, behind it.

As the most sacred of all Shintô shrines, Ise has traditionally been believed to be a purely Shintô site, free of Buddhist influences. The 13th century monk Mujû Dôkyô (or Ichien Dôkyô), in his Shasekishû ("Book of Sand and Pebbles"), relates that monks were not permitted to approach the shrine buildings, and that it was forbidden to speak of the Three Treasures of Buddhism[13] near the shrine. Instead, various euphemisms were used, such as calling Buddha "the cramped-legged one," calling sutras "colored paper" (somegami), and Buddhist temples mere "incense burners."

Mujû asserts, however, that Amaterasu was in fact in profound support of Buddhism, and in fact incorporates Buddhism into his account of the origins of the Japanese islands. He writes that it was Amaterasu (and not Izanagi and Izanami) who thrust a heavenly spear into the ocean depths, and that she did so guided by a seal placed by Dainichi (Vairocana Buddha) in that spot on the ocean floor. As in the Nihon shoki creation myth, brine foam which coagulated around the spear formed the islands of Japan; Mujû adds that the demon lord Mara noticed these events, and recognized them as the formation of a land in which Buddhism would later flourish. In order to hold off Mara's wrath, Amaterasu assured him that she would not permit the Three Treasures [of Buddhism] to come near to her; thus, by continuing to keep overt Buddhist activity away from Ise, the wrath of Mara is able to be avoided.[14]