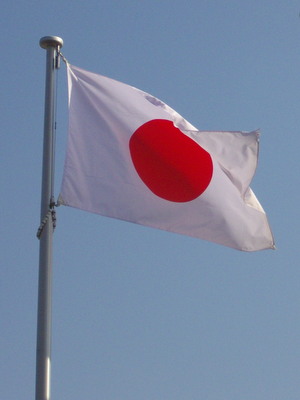 The Japanese flag is composed of a solid red circle against a white background. Known colloquially as the Hinomaru ("circle of the sun"), the design is meant to reference the Sun Goddess Amaterasu, and the sun itself, a symbol used by the Imperial Court and various samurai clans for many centuries.

Shimazu Nariakira is credited with being the first to suggest such a design for a national flag, having initially proposed in 1853/12 using such a design on Japanese ships, so as to display the ship's nationality and to distinguish it from the vessels of foreign countries.[1] Discussion of the issue initially encountered some difficulties, but with the support of lord of Mito Tokugawa Nariaki, the Tokugawa shogunate eventually agreed to this proposal, ordering the Hinomaru the standard jack for Japanese ships on 1854/7/11.[2] The following year, Satsuma domain's Shôheimaru, the first Western-style ship built in Japan, became the first ship to fly the Hinomaru.

The Meiji government then continued the practice, flying the Hinomaru from all postal ships beginning in 1870, and officially declaring the hinomaru design the official national flag later that same year. However, historian Takashi Fujitani suggests that it took some time for the association of the design with the nation, and with the Emperor, to become widely and firmly fixed among the Japanese people. For some time in the early Meiji period, rather, many people likely associated the "rising sun" iconography simply with auspiciousness or auspicious occasions. Though it was displayed prominently during Imperial tours and visits to the various provinces of the realm, this represented only the beginning of the establishment of the hinomaru as a national and Imperial symbol in the minds of the people.[3]