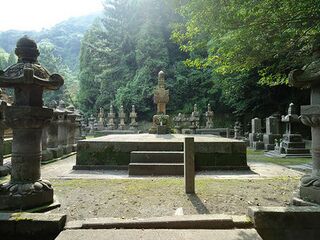 Shimazu Tsugutoyo was the 22nd head of the Shimazu clan, and the fifth Edo period lord of Satsuma han.

The eldest son of Shimazu Yoshitaka, he succeeded his father as lord of Satsuma when Yoshitaka was ordered by Shogun Tokugawa Yoshimune to step down in 1721. He was then betrothed in 1729 to Takehime, an adopted daughter of Shogun Tokugawa Tsunayoshi, also at Yoshimune's orders. After she was formally adopted by Yoshimune, the two were married.

From 1737 onward, Tsugutoyo successfully petitioned the shogunate repeatedly to be allowed reprieve from sankin kôtai obligations, on account of poor health; he thus remained in Edo from 1737 until 1749, and after returning to Kagoshima in that year, never returned again to Edo.[1]

Tsugutoyo retired in 1746, in favor of his eldest son Shimazu Munenobu. Munenobu died shortly afterwards, in 1749, and was succeeded by his brother (Tsugutoyo's second son), Shimazu Shigetoshi, who then died in 1755. The retired Tsugutoyo thus became a counselor for his grandson, Shimazu Shigehide, who then became lord of Satsuma.

Tsugutoyo himself died in 1760, at the age of 60, in the Ninomaru palace at Kagoshima castle. He is buried in the Shimazu clan graveyard at Fukushô-ji, in Kagoshima, along with Takehime and two other wives (the birth mothers of Munenobu and Shigetoshi).