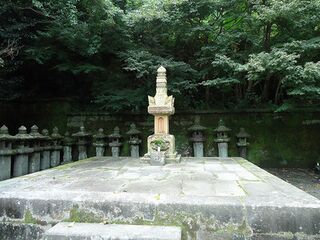 Shimazu Shigetoshi was the 7th Edo period lord of Satsuma han, and 24th head of the Shimazu clan.

The second son of Shimazu Tsugutoyo, Shigetoshi was adopted into the headship of the Kajiki Shimazu family, but after his elder (birth) brother Munenobu died young, he was posthumously adopted by Munenobu, and succeeded him as lord of Satsuma in 1749.

In 1753, Shigetoshi received orders from the shogunate to contribute to riparian public works projects on the Kiso, Ibi, and Nagara Rivers. He appointed karô Hirata Yukie to oversee the project, and dispatched over 1,000 retainers to perform the work. Shigetoshi stopped in the area, near Ôgaki-shuku on the Mino Road, along with his nine-year-old son Zenjirô, to inspect the progress while on his way to Edo in 1754/7. The project was completed the following year, at the end of two to three years of severe difficulties.

Shigetoshi died on 1755/6/16 at age 27, at the Shimazu clan's mansion in the Shiba district of Edo. He is buried alongside his mother, a later wife of his father Tsugutoyo, and his son & successor Shigehide, at the Shimazu clan cemetery at Fukushô-ji in Kagoshima. His wife is buried elsewhere in the cemetery.