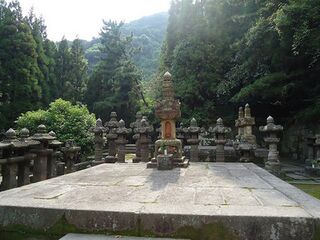 Munenobu's grave at the Shimazu clan cemetery at Fukushô-ji, in Kagoshima

Shimazu Munenobu was the 23rd head of the Shimazu clan, and the sixth Edo period lord of Satsuma han.

Munenobu was the eldest son of Shimazu Tsugutoyo; his mother was a daughter of the Shibuya clan. He was raised as an adopted child of Tsugutoyo's wife Take-hime (an adopted daughter of Shogun Tokugawa Tsunayoshi), and was as a result granted the privilege of using the Matsudaira name.

Raised in Edo, he traveled to Kagoshima for the first time in 1745.[1]

Upon his father's retirement in 1746, Munenobu became head of the clan, and of Satsuma domain. He struggled with a heavy household debt, and attempted to run the domain frugally. He retired in 1749 after only three years as the lord, journeying to Edo for his retirement[2] and passing on leadership of the domain to his younger brother Shimazu Shigetoshi. During that brief period, however, he escorted a Ryukyuan embassy to Edo in 1748, and was elevated to Upper Junior Fourth Rank.[3] Munenobu died less than a year into his retirement, at the young age of 21.