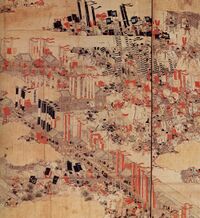 Rising tensions between the fledgling Tokugawa bakufu and Toyotomi Hideyori, the heir of the late Hideyoshi, led to the 1st Siege of Hideyori's Osaka fortress, Osaka castle. Prior to the start of hostilities, Hideyori had gathered as many as 100,000 ronin within his castle walls, many of whom had been dispossessed by the Tokugawa after Sekigahara. The campaign began in November and opened with a series of hard-fought actions that continued for about a month at a considerable cost to the Tokugawa. Knowing that a direct assault on the castle was unlikely to succeed, Tokugawa first resorted to a bombardment of the walls, then to peace talks. Hideyori unwisely agreed to negotiate, allowing Ieyasu to prepare for his next effort to bring the last bastion of the Toyotomi down.