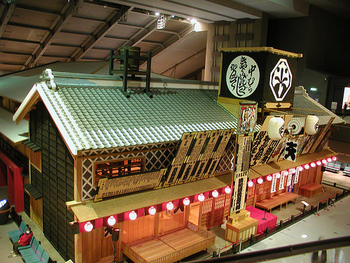 A life-size reproduction of the theatre, 11 bays wide and 3 bays deep, at the Edo-Tokyo Museum, displayed as it would have looked for a kaomise performance.

The Nakamura-za was one of the three chief licensed kabuki theatres in Edo.

It was established by Nakamura (Saruwaka) Kanzaburô I, who obtained a formal license from the shogunate in 1624, and built his theatre at Nakahashi (Nihonbashi) in Edo. Over the years, it moved from Nakabashi to Negi-chô in 1632, then to Sakai-chô in 1651, then to Saruwaka-chô, along with the city's other major theatres.

As was the case for most buildings in Edo, the Nakamura-za was destroyed or severely damaged by fire numerous times over the course of its history; some particularly notable fires were the 1657 Great Meireki Fire, the Oshichi fire of 1682, the fires caused by the Genroku Earthquake of 1703, and those created by the Ansei Earthquake of 1855.

In 1670, the number of licensed theatres permitted in the city was increased to four. The Nakamura-za maintained its license, and was accompanied by the Ichimura-za, Morita-za, and Yamamura-za as the chief kabuki theatres in Edo. The four theatres began a tradition in 1709 of co-organizing a sogamono New Year's performance, a tradition which continued somewhat regularly down to the present day.

Over the course of its history, the Nakamura-za also saw the premieres of a great many famous kabuki plays. Ichikawa Danjûrô I played the title role in Narukami for the first time at the Nakamura-za, in 1684, and performed the famous scene Shibaraku there for the first time in 1697. Other plays which made their debuts at the Nakamura-za include Zôhiki in 1701, the kabuki adaptation of Sonezaki Shinjû in 1719, Kagekiyo in 1732, Natsu Matsuri Naniwa Kagami in 1768, Yotsuya Kaidan in 1825, and the three most popular kabuki plays of all time, Sugawara Denju Tenarai Kagami, Yoshitsune Senbon Zakura, and Kanadehon Chûshingura, in 1747, 1748, and 1749 respectively.

The Nakamura-za saw numerous innovations in kabuki as well, including the first use of seri (trapdoors used for actors' entrances/exits) in 1727. The hikinuki costume change technique, by which a few threads are pulled to allow one costume to be quickly removed, revealing another underneath, debuted in 1731.

The Nakamura-za went out of business in 1793, losing its license to the Miyako-za, but reopened and regained its license in 1797. When the theatre district of Sakai-chô was destroyed by fire in 1841, the theatres were forbidden to rebuild there, and were moved to Saruwaka-chô, where a rebuilt Nakamura-za opened in 1842 on the former site of the lower mansion (shimo yashiki) of the Koide clan lords of Sonobe han.[1]

The theatre went bankrupt and closed in 1876; it reopened a number of times afterwards, under names including Miyako-za, Saruwaka-za, and Torigoe-za, but it struggled severely and was never successful again. When the building was destroyed by fire in 1893, it was not rebuilt.

Today, a Maruzen department store stands on the site of the original Nakahashi/Nihonbashi Nakamura-za.