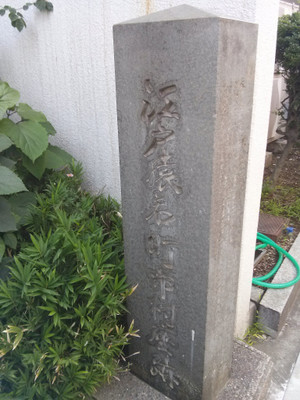 The Ichimura-za was one of the chief licensed kabuki theaters in Edo.

Opened in 1634 as the Murayama-za and originally located in the Fukiya-chô neighborhood near Nihonbashi, just down the street or around the corner from the Nakamura-za and Morita-za, all three theaters were forced in 1842 to relocate to Saruwaka-chô in Asakusa, to the former grounds of the lower mansion (shimo yashiki) of the Koide clan lords of Sonobe han.[1] Though remarkably financial stable compared to the Morita-za (which went bankrupt several times over the course of the Edo period), remaining in operation for roughly 150 years from its first opening, the Ichimura-za did succumb to financial difficulties and close in 1784/4, with the building being demolished two months later. It was then, for a time, replaced by the Kiri-za, which took over the Ichimura-za's place as one of the few officially licensed theaters in the city.[2] The Ichimura-za was later rebuilt and reopened, however.

The Ichimura-za was home to many of the most famous and popular actors of the period, and saw many notable debuts and other events, including the 1717 debut of the kabuki version of the puppet play Battles of Coxinga, the 1762 premiere of the dance piece Sagi Musume, and the 1862 premiere of Benten Kozô.