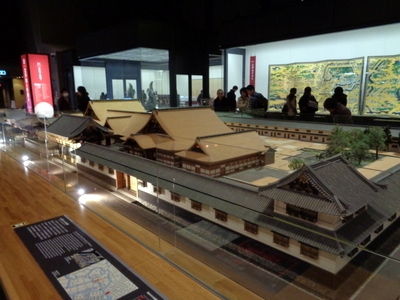 A model of the Edo kami yashiki (upper residence) of Matsudaira Tadamasa, on display at the Edo-Tokyo Museum.

Daimyô yashiki were Edo period mansions maintained in Edo, Kyoto, and other major cities by the daimyô. As part of the sankin kôtai system, daimyô had to spend a considerable amount of time in Edo once every few years, and to maintain a household with their wives and children as hostages in Edo. Mansions were also maintained in Kyoto, Osaka, and elsewhere, serving as bases of operations for the daimyô's political and economic activities in those cities, and housing the daimyô and his retinue as they passed through on their way to/from Edo on their sankin kôtai journeys.

Originally, the Tokugawa shogunate provided mansions to the tozama daimyô, in which their wives and children would live in Edo, as hostages, as part of the sankin kôtai "alternate attendance" system. Following the extension of sankin kôtai obligations to all daimyô in 1635, the daimyô practice of maintaining a mansion in Edo became much more common, and certain aspects of their layout, design, or locations in the city became somewhat standardized. After the 1657 Meireki Fire in particular, when the city was rebuilt, daimyô rebuilt multiple mansions in different parts of the city. A given daimyô's "upper mansion" might be located within the walls or moats (Marunouchi), below the Nishi-no-maru, or in neighborhoods such as Atagoshita or Sotosakurada; his "middle mansion" might be located just inside the outermost walls of Edo castle; and his "lower mansion" would be somewhere in the outskirts of the city. Generally speaking, the lord resided at the "upper mansion" (kami-yashiki) while in Edo, while his children and retired predecessors lived at the "middle" (naka-yashiki) or "lower mansion" (shimo-yashiki). The middle and lower mansions often also housed retainers too low-ranking to enter the upper mansion, as well as storehouses and other facilities. Many domains also maintained kakae yashiki, further out from the city, which managed areas of farmland to help support the domain's financial/food-supply needs.[1]

Daimyô mansions varied considerably in size and lavishness, in accordance with the wealth of their lords; official regulations further circumscribed the construction of the mansion. The main gates to the compounds provide just one example of this. Daimyô possessing over 100,000 koku in official (omote) kokudaka, including the kunimochi daimyô, had gates guarded on both sides by guardhouses (bansho) with karahafu gables, while those between 50,000 and 100,000 koku were forbidden the karahafu gables for these gatehouses, and most employed simpler hisashi eaves for their guardhouses. Daimyô under 50,000 koku, meanwhile, were forbidden from having two guardhouses, and so had only one, to one side of the compound's main gate.[2]

Edo boasted more than six hundred daimyô yashiki compounds, many of which hosted considerable populations. The roughly 250-300,000 people resident in these compounds in the 18th to early 19th centuries comprised roughly 20-30% of the total population of the city, though a large portion of these individuals, roughly 1/3 to 1/2, were only temporary residents, coming and going with their daimyô.[3] To cite some examples, the Chôshû han mansions in Edo were maintained by a group of roughly 2,000 samurai.[4] The Tosa han mansions in Edo, meanwhile were home to 4,500 people in 1694; in 1697, the lord arrived in the city on his sankin kôtai mission with 2,800 people, adding considerably to that figure. The lord of Kaga han, meanwhile, typically arrived in Edo with an entourage of 8,000, leaving roughly 4,000 behind afterwards to help manage his estates. The Edo mansions of Kaga han are believed to have had, regularly, as many as 30,000 inhabitants, and to have covered roughly 267 acres, filled with warehouses, barracks, residences, gardens, and schools.[5] If figures from the budget of Tosa han in one year are any indication, expenses related to maintaining and supplying these Edo mansions could be as much as one-third of the total annual expenses of a daimyô's household, i.e. one-third of the budget of the domain administration. In 1688, Tosa spent 1,422 kan on expenses related to the Edo mansion, out of a total of 3,953 kan in domain expenditures that year.[6]

A 1690 law required daimyô to organize and manage the defenses of their own Kyoto mansions.[7]

The shogunate continued, in some cases, to allocate mansions to the daimyô, but daimyô also often seized lands from peasants to build their mansions.

Following the Meiji Restoration, many daimyô abandoned their mansions, either immediately once their feudal obligations to maintain residence in the city were relaxed (in 1862) and then abolished (in 1868), or some years later, following the abolition of the han, abolition of the samurai class, and attenuation of their stipends. While some were certainly maintained, either by their previous daimyô owners or by new Meiji elites who took them over as government offices or officials' residences, many others simply fell into disrepair. Ôki Takatô, the first governor of Tokyo, attempted to make good use of the newly empty land by organizing the widespread planting of mulberry trees and tea. As much as 9% of former mansion grounds were planted in this way; other sites became offices or residences for the Meiji government.[8]

In the end, it might be argued that the large areas of land held by the daimyô mansions had a positive result for the development of Tokyo into a modern city in the Meiji period and beyond, as it left many large areas in central parts of the city open to be developed into public parks, universities, government buildings, and so forth.

Today, indeed, many of the most prominent daimyô's mansions have since become the sites of universities, public gardens, or the like. To name some examples, Dôshisha University is based on the former site of the Satsuma han mansion in Kyoto; Tokyo University's main campus was formerly the mansion of the lords of Kaga han; the Akasaka Detached Palace was built on the former site of the mansion of the Kishû Tokugawa; and the garden of Tokugawa Yorifusa of Mito han, Koishikawa Kôrakuen, continues to be maintained today as a historic site & garden open to the public.