Nagakura Shinpachi was born the son of a Matsumae han samurai in Edo. He practiced Shinto Munen Ryu (Menkyo) at Gekikenkan dojo and Shingyoto Ryu at the Tsubouchi Shume dojo. (He met Shimada Kai in the dojo) He left Matsumae han to concentrate on practicing Kenjutsu. He became Shokkaku of the Shieikan dojo and joined the Roshigumi along with other Shieikan members. 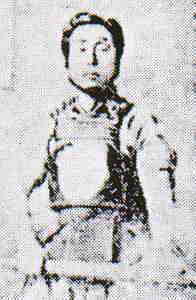 Nagakura Shinpachi was one of 4 members who raided inside of Ikedaya. After the Kinmon Rebellion, Kondo Isami's arrogant behaviours irretated some Shinsengumi members. Nagakura and Harada Sanosuke and Saito Hajime and three other members submitted a petition of the impeachment of Kondo to Matsudaira Katamori but failed. When they returned to Edo after the Battle of Koshu-Katsunuma, Nagakura and Kondo argued over plans. Kondo asked "If you become my retainer" then Nagakura and Harada made a decision to leave the Koyochinbutai (the renamed Shinsengumi). They formed Seikyotai, participated in some battles in Utsunomiya, Imaichi and headed north but it was too late. 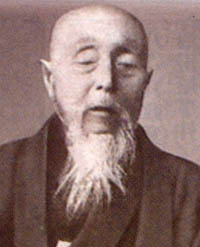 Nagakura had to hide for a while because he fought against the Imperial troops. Eventually he returned to Matsumae han in late 1868 and married the han doctor's daughter. (Later his name changed to Sugihara Yoshie) He worked as Kenjutsu teacher in Kabato prison, Hokkaidô. He had a dojo in Tokyo for a while but moved back to Hokkaidô and lived there until he died. In 1876, Nagakura built a grave for Kondo Isami and Hijikata Toshizô with the help of Matsumoto Ryôjun who used to be the Shinsengumi doctor. Later, Nagakura's grave was built next to fellow Shinsengumi members' graves(his will). They still exist near JR Itabashi station. A memorial event is held every year.

This article is a rough draft which is in need of cleanup (grammar, spelling, corrections, links, formatting, etc.). You can help SamuraiWiki by editing it. Click here for a list of articles that have been tagged as a draft copy.
Retrieved from "http://samurai-archives.com/w/index.php?title=Nagakura_Shinpachi&oldid=13500"
Categories: