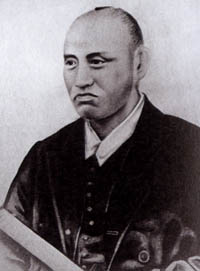 Shimada Kai was from Ôgaki han in Mino province, and was the son of Kondô Iemon. In 1857 he went to Edo, where he became a student of Shingyoto Ryu (He met Nagakura Shinpachi in the dojo). At about this time, the Shimada clan of Ôgaki han requested of him to become the head of the clan.

He joined the shinsengumi in 1863 and participated in the Ikedaya Affair of 1864, for which he was rewarded 10 ryo, with a bonus of 7 ryo. His nickname was "Rikisan" (meaning "Sumo wrestler") because he was big like a Sumo wrestler (apparently nearly six feet tall and well over 300 pounds). When Kondo Isami was shot in the Fushimi street, Shimada quickly struck the horse Kondo was riding, causing it to quickly flee, saving Kondo's life. During the Boshin War, he participated in most of the battles from Kyoto to Hakodate. The Shinsengumi finally surrendered in May 15 1869 and Shimada was sent to Nagoya han.

He was released in 1871 and moved to Mino with his family. They soon moved to Kyoto, and Shimada opened a Kenjutsu dojo. He was asked to serve the new government on more than one occasion but never agreed. Kenjutsu fell out of popularity since the Bakumatsu, and so his dojo fell into financial difficulty. Ironically, he started working as a guard in the Nishi Hongan-ji which used to be the Shinsengumi headquarters. He died while he was working at the temple. He always kept a paper of Hijikata's Kaimyo.