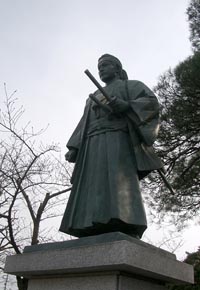 Hijikata Toshizo was born in a wealthy farmer family in Tama district, Musashi. He practiced Kenjutsu in many dojo while he was working as a medicine peddler. One day, Hijikata met Kondo Isami at Sato Hikogoro's dojo and he became a pupil of Tennen Rishin Ryu in 1851 and was officially enrolled at the school in 1859. His skill of the ryu-ha was just Mokuroku, however his name was listed on Bujutsu Eimei Roku which means he was known as a swordmaster in those days. In 1863, Hijikata and other Shieikan members joined Roshigumi.

Kyokuchu Hatto(The Shinsengumi Regulations) is believed to be Hijikata's idea. Many of Shinsengumi members lost their lives because of the strict regulations.

During the Ikedaya Affair, Hijikata's troop arrived at Ikedaya later than Kondo's troop. Hijikata first secured around Ikedaya to not let Aizu and Kuwana han samurai in. As the result, the Shinsengumi received all the fame and prizes.

Hijikata commanded the Shinsengumi at the Battle of Toba-Fushimi and the Battle of Yodo-Senryomatsu(1868 January) instead of Kondo Isami, who was wounded at that time. The Shinsengumi lost many members in those battles. Then Hijikata realized "The age of swords is over."

When Kondo was captured at Nagareyama, Hijikata went back to Edo, already occupied by the imperial army, to appeal to Katsu Kaishu for Kondo's life.

Hijikata then headed to Utsunomiya with several Shinsengumi members (Saito Hajime took most of the members to Aizu) , to join the Bakufu troops.

He injured his foot in April and was sent to Aizu. However he was unable to come back to the front line until August. Kondo's grave in Aizu was built during the time. 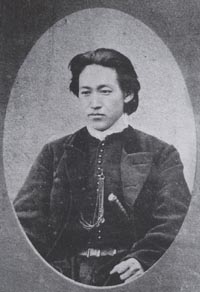 Hijikata and Bakufu troops occupied Goryôkaku in October and Matsumae castle in November. They announced the new "Republic of Ezo" (Enomoto Takeaki as the president) and Hijikata was appointed to be the Ezo Army Bugyo Nami.

1869 March, they attacked Miyako bay to take over the battleship Kôtetsu, but failed.

In April, the Imperial troops started landing on Ezo. Hijikata was guarding Futamataguchi, but had to return Goryôkaku because the Imperial army was getting close to Goryôkaku.

1869/5/11, Hijikata took a small unit to save the Shinsengumi in Benten battery where they were surrounded by the the Imperial army. Hijikata was shot at Ippongi. His body is believed to be buried in Hekketsuhi or Ganjo-ji.

This article is a rough draft which is in need of cleanup (grammar, spelling, corrections, links, formatting, etc.). You can help SamuraiWiki by editing it. Click here for a list of articles that have been tagged as a draft copy.
Retrieved from "http://samurai-archives.com/w/index.php?title=Hijikata_Toshizo&oldid=35778"
Categories: