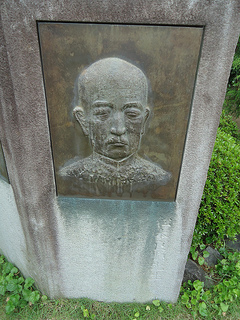 Matsumoto Ryôjun was a leading medical expert of the Bakumatsu and Meiji periods.

Ryôjun was the second son of Satô Taizen, founder of the Sakura Juntendô, a major center of medical research and education in late Edo period Japan. In 1849, he was adopted by Matsumoto Ryôho, court physician to the Tokugawa shogunate. Ryôjun was sent to Nagasaki in 1857, and studied for a time under Dutch medical expert Johannes Lijdius Catharinus Pompe van Meerdervoort, who had established the first Western medicine hospital in Japan, the Nagasaki yôjôsho. Ryôjun worked as Pompe's chief assistant for a time, and then returned to the Kantô, where he entered the service of the shogunate, playing a prominent role in overseeing and guiding the shogunate's medical activities, and serving as a medical officer for the Shinsengumi; during the Boshin War, too, he worked treating wounded shogunate soldiers.

Following the establishment of the Meiji government, Ryôjun was appointed the first Superintendent-General of the Imperial Japanese Army Medical Branch, and headed public campaigns for the healthful effects of drinking milk, and of bathing in the ocean.