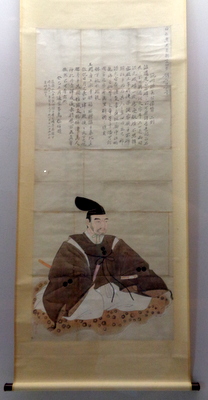 A portrait of Hakuseki by Tsubaki Chinzan, National Museum of Korea

Arai Hakuseki was a Confucian scholar and influential shogunal advisor of the early 1700s. Though he never held an official position within the Tokugawa shogunate, he was granted higher rank and status than any other Confucian scholar of the entire Edo period, outside of members of the Hayashi family, and was permitted to exercise considerable influence within his role as advisor and tutor to the shogun. Hakuseki served as chief advisor to Tokugawa Ienobu (r. 1709-1712), but lost his influential position when Ienobu's successor Tokugawa Ietsugu died in 1716 and was succeeded as shogun by Tokugawa Yoshimune.

He was the grandson of Arai Kageyu (d. 1609); his father was metsuke and Tsuchiya clan retainer Arai Masanari (1601-1682), and his mother, a daughter of the Fujiwara clan by the surname Sakai (1617-1678). Born in Kururi domain (centered at what is today Kimizu, Chiba prefecture, he was named Kinmi by his parents, and only took on the scholarly pseudonym Hakuseki later, as an adult.

A copy of Nakae Tôjû's book Okina mondô ("Discussion with an Old Man") is said to have been the key inspiration for sparking Kinmi's interest in Neo-Confucianism when he was around 17 years of age. Finding the subject compelling, he began studying Zhu Xi-style Neo-Confucianism more extensively.

Around the age of 21, the young Hakuseki and his father were expelled from their home domain as the result of some political dispute or scandal. Stripped of the support of their former lords, he then devoted himself all the more deeply to his studies, partially perhaps in the hope of attracting another lord to take him into his service.

Hakuseki entered the service of the Hotta clan in 1682, at the age of 26, and that same year met with envoys from Korea, presenting them a collection of his poems, entitled Tôjô shishû. Korean records show that they regarded Hakuseki as possessing "authentic [literary] talent," but that "his personality is more distinguished than his verses."[1]

Hakuseki later married a daughter of Asakura Nagaharu, another Hotta retainer. His first daughter, Shizu, was born in 1687, but died in infancy, possibly at birth. His second daughter, Kiyo, was born in 1689. Hakuseki's first son, Arai Akinori, was born in 1691; Hakuseki resigned from his service to the Hotta earlier that year,[2] and moved to a farm at Honjô, in Edo, near the banks of the Sumidagawa.[3] Meanwhile, around this same time, he studied under noted Confucian scholar Kinoshita Jun'an. Beginning in 1693, he then served as an advisor to Tokugawa Tsunatoyo, lord of Kôfu han, remaining his advisor as Tsunatoyo became Shogun Tokugawa Ienobu in 1709. Hakuseki enjoyed considerable power and political influence as a result of his close relationship with Ienobu; the shogun was willing to support the implementation of many of Hakuseki's proposals, with little question or challenge. This earned Hakuseki his share of antagonism, however, from other shogunate elites, such as rôjû Tsuchiya Masanao, who resented Hakuseki's power, and the ease with which Hakuseki was able to have his ideas implemented.[4]

Hakuseki was granted hatamoto status, a stipend of one thousand koku', and the court rank of Lower Junior Fifth Rank in 1709,[5] and was named Chikugo-no-kami in 1711. After Tokugawa Yoshimune became shogun in 1716, however, bringing his own circle of advisors and confidants, Hakuseki fell out of influence and prominence. He died in 1725 at the age of 69.

Hakuseki espoused a philosophical approach he called kakubutsu, which advocated taking nothing for granted (e.g. practices performed simply according to precedent), but instead carefully examining and considering the origins or reasons for everything. He also believed that Tokugawa Ieyasu had intended to establish a new system of rites (or etiquette, J: rei), as proper Confucian rulers of a new regime were meant to do, and that Ieyasu's death before implementing such a system was a key reason underlying a number of the shogunate's difficulties, including the fact that several shoguns had by that time already died without siring a direct (biological) heir, causing the shogunal lineage to deviate from a more strictly direct father-to-son line of descent. Hakuseki wrote that now, a century later (i.e. in the 1710s), it was time for such a system of rites to be put into place. Thus, with these as his guiding beliefs, Hakuseki suggested or authored numerous policy reforms.

In his capacity as chief Confucian advisor in the court, Hakuseki played a key role in proposing era names, and crafted the era name Shôtoku ("correctness and virtue") in 1711 to correspond with Shogun Tokugawa Ienobu's reign. He also initiated and oversaw a revision of the Buke shohatto, the various laws of the military houses (i.e. the samurai clans), as well as composing a line-by-line commentary on this revision, entitled Shinrei kukai. Hakuseki also attended the 1709 investiture ceremony of Tokugawa Ienobu (as representatives of the Imperial Court came to Edo and formally named Ienobu "Shogun" in the name of the Emperor), and the accession and coming-of-age ceremonies of Emperor Nakamikado in 1710 and 1711 respectively, and having witnessed the forms of these rituals, suggested or authored numerous changes to ritual protocols, including new guidelines for the shogun's dress and behavior when visiting the Confucian temple & academy at the Yushima Seidô, and a revision of court dress for daimyô and hatamoto, based on his attitudes and expertise in Confucian political philosophy.

Hakuseki was particularly influential in effecting a shift in shogunate attitudes and policies regarding foreign relations, articulating the conceptual meaning and discursive value for the shogunate's legitimacy of conceptualizing foreign relations with Joseon Dynasty Korea and the Ryûkyû Kingdom in terms of a tributary relationship patterned after the Sinocentric worldview. In much of his writings and policy advice, he emphasized shogunal authority over the authority or autonomy of the daimyô, and similarly avoided rhetoric of Imperial authority, though without overtly opposing or denying it.[6]

Among other reforms he advised implementing were the reversal of a 1695 debasement of the currency, and a series of regulations on foreign trade implemented in 1715. These regulations restricted the number of Chinese and Dutch ships which could call annually at Nagasaki to thirty and two respectively, and instituted a system in the style of the Chinese tally trade, in which Chinese ships leaving Nagasaki were given half a seal which, when matched up with the other half held by the Nagasaki customs office, constituted a license to trade.[7]

Hakuseki made a point to meet with ambassadors or representatives from foreign countries on a number of occasions, including meeting with Jesuit Giovanni Battista Sidotti in 1708, with ambassadors from Ryûkyû in 1710, and with envoys from Korea in 1711.