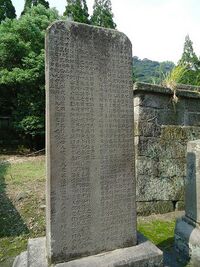 Stele to Yokoyama Yasutake at Fukushô-ji in Kagoshima

Yokoyama Yasutake was the older brother of Mori Arinori, and is known for his suicide, committed in protest against the corruption he perceived within the Meiji government. Compiling a ten-article statement accusing many government ministers of thinking selfishly, for their own personal benefits rather than in the interests of the benefit of the nation, Yokoyama held a copy of his statement in his hands as he killed himself outside the gates to the National Diet House of Representatives on a day in the seventh month, 1870.

The Meiji government, in an unprecedented response, sent condolence money to the prefectural government of Kagoshima (Yokoyama's home prefecture). A stele dedicated as a monument to Yokoyama was erected by Saigô Takamori at the Shimazu clan cemetery at Fukushô-ji in Kagoshima City, adjacent to Yokoyama's grave.