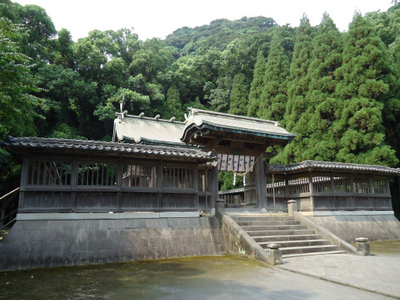 Tsurugane Shrine is a Shinto shrine located immediately between the old Shôkoshûseikan factory complex, and the Shimazu clan garden at Sengan'en, in the Iso neighborhood of Kagoshima, .

Following the abolition in 1869 of the Shimazu clan family temple Fukushô-ji, in the anti-Buddhist policies of the day, a new site was needed at which the ancestral spirits of the successive lords of the Shimazu clan, their families, and loyal vassals could be honored. Thus, this new shrine was established, also in 1869, at Yamashita Tsurugane, in the Sakamoto neighborhood of Kagoshima. The spirits enshrined are, specifically, the heads of the central Shimazu lineage, and of the Tamazato Shimazu clan, along with their families, plus five karô and forty-five vassals who committed suicide upon the death of their Shimazu lord (junshi seppuku). The shrine was named a prefectural shrine (kensha) in 1873, and was combined with a Tatsunoo Shrine in 1879.

The shrine was relocated to its current location by Shimazu Tadashige in 1917, while Terukuni Shrine took over its previous location. The shrine contains a number of treasures, including a red-threaded suit of armor (yoroi) used by Shimazu Tadahisa, a sword from the Bizen Unshô-Unji school presented to the shrine by Tadashige, figures of each of the successive Shimazu lords, and a replica of the grave of Minamoto no Yoritomo. The spirit of Kameju-hime, daughter of Shimazu Yoshihisa, is also worshipped there.