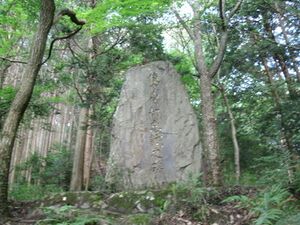 Monument to Shunkan on or near the site of the mountain villa in Shishigatani where the conspirators met.

Shunkan was a Shingon monk who, after taking part in the Shishigatani plot to overthrow Taira no Kiyomori, was exiled along with two others to Kikai-ga-shima. His story is featured in the Heike monogatari, and in a number of traditional derivative works, including the Noh play Shunkan and jôruri play Heike Nyogo-ga-shima. Twentieth century authors Kikuchi Kan and Akutagawa Ryûnosuke also produced works entitled Shunkan.

Shunkan was a member of the Murakami Genji branch of the Minamoto samurai clan, and the son of Hôin Kanga, a priest of the Ninna-ji. He served Emperor Go-Shirakawa as a close aide and was associated with the Hôsshô-ji.

In 1177, he met with a number of others in secret in his mountain villa in Shishigatani (some sources, such as the Gukanshô, say the villa belonged to someone else), and plotted to overthrow Daijô Daijin Taira no Kiyomori who, along with other members of the Taira clan, dominated and controlled the Imperial government. The plot was discovered before any actual action was taken, and Shunkan was exiled, along with Fujiwara no Narichika, Narichika's son Fujiwara no Naritsune, and Taira no Yasunori, to an island called Kikai-ga-shima, south of Kyûshû's Satsuma province. There is debate as to whether or not this was the same place as the island bearing the name Kikai today.

Later that year, according to the Heike monogatari, when the Imperial consort Taira no Tokuko was pregnant with the future Emperor Antoku and was having difficulties, Kiyomori, her father, granted amnesty to Yasuyori and Naritsune, in order to appease their angry spirits, in the hopes of easing his daughter's pain. Shunkan was thus left alone on the island, the fourth exile Narichika having been executed by the Taira some time before.

He was found two years later, in 1179, by a monk from his temple by the name of Ariô, who brought a letter from his (Ariô's) daughter. Having already sunk into deep despair during his time alone on the island, Shunkan read the letter and made the decision to commit suicide. He refused food, and died of starvation. It's said that Ariō then brought the monk's ashes and bones back to the capital; nevertheless, graves for Shunkan can be found on both Kikaigajima and Iô Torishima today.